The Castle of Cagliostro

The Castle of Cagliostro – 1979
aka Rupan sansei: Kariosutoro no shiro 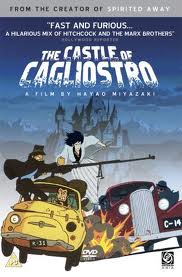 Ever since I first viewed the Disney-released version of Princess Mononoke last year, I have done everything in my power to see Hayao Miyazaki’s other films. My Neighbor Totoro and Kiki’s Delivery Service, at least the dubbed versions, were readily available, and they were perfect. The next one I found was this film. It was released on DVD by Manga company. This one does not contain the visual mastery, or even the storytelling mastery, as the other three films of his that I’ve seen, but there is definitely great promise shining through. The animation is not great. It’s a lot more stiff than what would come later. There are a few physics-defying scenes that kind of made me cringe (the car driving sideways up a steep incline, Lupin jumping off the roof of the castle is still able to catch the side of a turret). The story is quite good. It has a lot of excitement, reminiscent of the Indiana Jones movies. The characters are fun. In short, it is just a very entertaining film.

So if you have any interest in anime or in Miyazaki, by all means, the DVD is worth buying. Unfortunately, the Japanese soundtrack is a little weak. The English side is much better for its sound quality, but I realize most animephiles despise dubs; this one is particularly good, and the remastered soundtrack makes it worth it. The DVD has a really nice layout. I was kid of expecting it just to have been thrown on a DVD and sent out. At least they took their time. Now, if Buena Vista Home Entertainment (which had no part of this pre-Ghibli film) would release all of his other films to DVD!!!