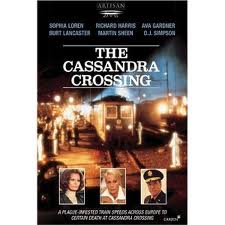 Silly, but fun disaster movie about a train traveling to Switzerland. On board is a man with a deadly biological disease…and the train is heading to a bridge that can’t possibly handle the weight…and it has 1,000 innocent people on board!

The plot is ridiculous but no sillier than “The Towering Inferno” or “The Poseidon Adventure”. Also the cast is full of big names. Sophia Loren (looking very bored) and Richard Harris (in it for the money) play a twice divorced couple who (naturally) fall in love again when disaster hits. Ava Gardner plays a rich old woman who keeps Martin Sheen (!!!!!) for…well, you know! O.J. Simpson is also on board (unfortunately). Burt Lancaster (looking VERY old), John Phillip Law (pretty and blank) and Ingrid Thulin (who?????) watch on tensely.

The dialogue is uproarious but the cast pretty much pulls it off–especially Gardner (who has the best lines and is enjoying every second of it). Sheen is hysterical–with his long black hair and “what am I doing here” expression…my guess is that this isn’t on his resume. Nice black underwear there too.

Only complaints–It’s too long and there was no reason to get so bloody and violent at the end–except for that ending, this is PG material (the film has an R rating). Still, it’s fun to watch.