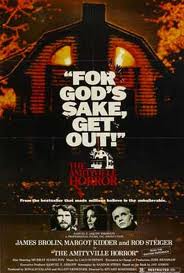 A family (James Brolin is the dad…Margot Kidder is the mom) move into a beautiful house in Long Island NY. Naturally it turns out to be haunted.

This is a (bad) adaptation of a very good book. Supposedly the book was accepted as being true…we all know now that it’s totally fictional. The book was a quick, scary read. The movie takes the book, jettisons almost all of the scary material, and ends up being a VERY dull mess. What was the studio thinking? Why take a good book and totally destroy it?

The acting doesn’t really help. Brolin appears drugged out during the entire movie and Rod Steiger REALLY overacts as a priest. Margot Kidder is very good–she gives this movie a much better performance than it deserves. And it IS kind of fun to see Murray Hamilton and Don Stroud as priests.

The film does have a few good moments: there’s an opening multiple murder scene which jolts you and a certain dream Kidder has is nice and gory (and not in the book). Also the film looks beautiful–especially the house. This was AIP’s (American International Pictures) last film–it was also their biggest hit. THAT’S scarier than anything in this movie.

Basically a dull, big-budget horror movie. Let’s hope the remake is better. This is a 1 all the way.