Taxi Driver – 1976
On every street in every city, there’s a nobody who dreams of being a somebody. 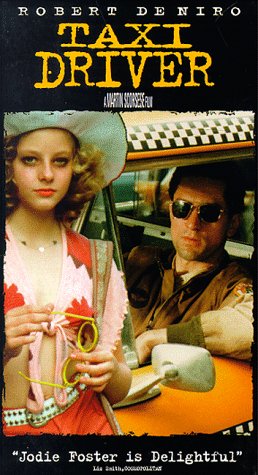 Explains What It`s Like To Be Male,
How would anyone be able to relate to Travis Bickle ? He`s a freak show , a fantasist and a loner who watches porn films in cinemas with a cola in one hand and a candy bar in another and to all intents and purposes is an assassin and a stalker , but he also strikes a cord with any man who`s been angry and young and rejected . He`s an outsider that society has turned its back on : ” Why won`t you talk to me ” is the heartbreaking question every young angry man screams at the world when he`s very alone.

Scorsese directs Paul Schrader`s low concept script on a shoestring budget – That`s not a criticism , quite the reverse because this leads to a hyper-realism and it`d be impossible to think that a major Hollywood studio would produce something like this nowadays where everything is about making money while playing it safe : A character study of a disturbed loner ? 12 year old prostitutes ? Vigilante executions ? Too controversial , not enough explosions , not enough CGI . If there`s a flaw in the screenplay it`s at the end where Travis wipes out the pimp business and becomes a hero which left me confused . Doesn`t society punish murderers even if they kill scum that use 12 year olds as prostitutes ? Even if he was cleared by the jury surely Travis would still have stood trial for murder ? but this is never referred to in the closing scenes , but I guess this is a comment on how society can quickly make a hero out of a villain and how a nobody can become the talk of the town , but still it seems to go against the grain of the script where we – Or at least the young males in the audience – recognise that an uncaring society is the villain where as Travis is the hero all along.

Despite the flawed ending of the screenplay ( Which is superb untill the last ten minutes ) this is still a movie masterpiece with Scorsese getting an acting tour de force from his cast . Jodie Foster as a child who sells her body on the streets of New York , a totally disturbing , brilliant performance , and DeNiro and Keitel in the same movie ! I`ve no idea if this is just hype but I heard all the stage schools in the USA were swamped at the time by applications from applicants in Compton , Hell`s Kitchen , South Central and The Bronx who`d seen DeNiro and Keitel in the ” I`m hip ” scene ( A scene that was totally adlibbed by the actors ) and decided that acting could be cool and macho after all . As I said I don`t know how true this is but the performances of these two actors has given a massive amount of credibility to the acting profession and it really is sad to see the DeNiro of today churn out so much garbage . This his greatest performance . I also rate it as Scorsese`s best movie.

As a footnote may I recommend to all the angry young men reading this review to track down the albums of Matt Johnson aka The The especially the mid 80s albums SOUL MINING and INFECTED which have lyrics that could have been written by Travis himself.

Matt is a great fan of Scorsese and it shows