Silent Running – 1972
Amazing companions on an incredible adventure… that journeys beyond imagination! 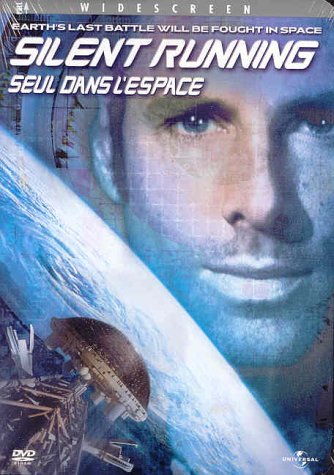 An example of the new expensive Sci-Fi cinema that has at least managed to capture the alien magic of space travel is Silent Running, made by Douglas Trumbull who worked on 2001. It’s an ecology story, and any sci-fi fan will catalogue it’s faults for you, but there is a genuine poetry about it’s vistas of stars (the flight through Saturn’s rings in particular), and a welcome humour in it’s handling of the team of unlikely little robots helping Bruce Dern to save the last of Earth’s forests.

Silent Running (1972)
I remember seeing this movie for the first time . It was in the late 1970s and I was a mere child . What a sad film SILENT RUNNING was . It touched my very soul and I went to bed with tears in my eyes . I saw it again today and I have to say it’s incredibly cheesy . Talk about mouldy cheese !

SILENT RUNNING feels like a substandard Disney film mixed up with a Steven Seagall environmental thriller . It’s also very strange watching Bruce Dern play an eco-warrior . Throughout the late 70s Dern found himself being type cast as OTT psychotic villains , every time some Hollywood producer wanted to make a movie about a nutter who was a Vietnam vet Dern would always be at the top of the list and it’s impossible to think of him as anything but a bad guy , though having said that Dern’s character Freeman (What a deep name – YAWN) isn’t the archetypal tree hugging yogurt knitting environmentalist , he’s more of a ” greeniac ” who also likes to dress up as Jesus . Oh and seems unaware that lack of sunlight causes leaves on trees to fall off . Typical environmentalist – He thinks he knows about nature but is totally ignorant about simple stuff like seasons.

It’s also a very manipulative film where the audience’s sympathy is made to lie with three robots rather than – Freeman aside – the other human characters , the idea being that machines with human qualities are somehow better than real people . I’ve met lots of real people and the one sub culture I dislike intensely are environmentalists.

The script also talks down to the audience . Freeman presses a computer keyboard and a tray of processed food comes out . He turns to the sweet little robots and says ” I know . I’ve been eating this for too long . Let’s go into the forest for some real food ” where he hopefully kills some animals to make a big mac , and when you consider the content of this movie there’s a life time of cheese burgers here