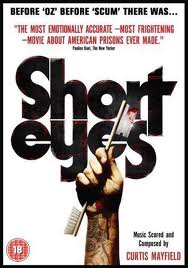 I don’t know how much of a human being I would be if I met you on the sidewalk.
Short Eyes is directed by Robert M. Young and written by Miguel Piñero who adapts from his own play. It stars Bruce Davison, Jose Perez, Nathan George, Don Blakely, Curtis Mayfield and Shawn Elliott.

The Tombs, A House of Detention in New York City receives a new prisoner, white middle classed Clark Davis (Davison). He’s charged with raping a young girl, quickly identified as a Short Eyes (paedophile) by the other inmates and lined up for hostility from the off. Only one prisoner is prepared to engage Clark in conversation, but with atmosphere on the block already bubbling at breaking point, Clark’s innocence or guilt is most likely irrelevant.

One of the most sedate but effective prison based movies out there, Short Eyes comes with realism, intelligence and a conscience. Piñero’s play was itself a success, so source was reliable for treatment, what transpires is a tale of prisoners co-existing under trying circumstances. But it’s a hornets nest slowly being stirred by pent up sexual frustrations, egos, racial indifference and religion, once the suspected paedophile wanders into the equation you can literally see the tension starting to rise to the surface. Yet director and writer don’t go for cliché prison shocks involving violence and rape, they gnaw away at the viewers by letting the hatred and break down of moral codes build by way of rich characterisations and dialogue. It helps greatly that the makers have started the picture off by giving us a solid 20 minutes of character build ups, thus letting us get to know the inhabitants and their place of incarceration.

Unity is powerful, but it can also be ugly.

Some of the monologue’s are utterly compelling, delivered with extraordinary conviction by a cast keeping the material real. When the excellent Davison, who I applaud for taking on the sort of role many actors would run from, gets to pour out his words to Juan (Perez), it’s most uncomfortable viewing, yet also it’s heartbreaking as well. It was here that it dawned on me that Piñero’s (himself an ex-convict) characters are not prison film stereotypes, they are complex human beings, neither sympathetic or villainous, and that’s a real treat in this particular genre of film. The photography is purposely low-key and the music, mostly arranged by Soul maestro Curtis Mayfield (who also co-stars) eases around the prison walls. Both Mayfield and Freddy Fender get to sing and this acts as means to subdue the pressure cooker like mood.

This is not a prison film for those that need animalistic violence, this is very much a thinking persons prison piece. What violence there is is calmly constructed and acted by director and cast alike. The pivotal moment shocks, and rightly so, but here’s the kicker, it doesn’t shock as much as the monologue that closes out this most compelling and excellent of movies. 9/10

A movie about prison life. It deals with the inmates–their lives, hates, sexual feelings and the rituals that happen in prison. Clark Davis (Bruce Davison) is thrown in with them–he’s suspected of being a child molester (“short eyes” in prison slang). The other prisoners want to kill him…but Davis has talked to one prisoner Juan (Jose Perez) who has serious doubts about his guilt. But can he convince the others?

This was a pretty big art house hit (here in Boston at least) back in 1977. It dealt with (for the time) a taboo subject matter. Then it completely disappeared. That’s too bad–it deserves a wider audience.

It was shot in an actual closed-down prison (the Tombs) in NYC. That really helps the mood and feeling of the film. The acting is very good by all–especially Davison, Perez and Joseph Carberry (as Longshoe). But this is a very hard movie to sit through. Davison’s confession to Juan is VERY explicit, a sequence where a prisoner is beaten up and tortured by the others is unpleasant and the ending is very disturbing.

It’s not a perfect film. It was a stage play first–and it shows. The action never moves away from two areas and occasionally the inmates speak WAY too intelligentally for the characters they’re playing. (I seriously doubt that the character Longshoe would ever know the word “quadroon”–or what it meant). Still a very powerful, disturbing drama. Well worth seeking out.

Maybe the best prison film ever made because its origin is people who were actually in prison, most notably its main author, Miguel Piñero. The film deals with the interrelationship between the prisoners of a cell block. That’s what most of the film is, the observation of these men and their culture. The plot of the film is about a new arrival (Bruce Davison) who has been arrested as a suspect on a child molestation charge. He’s never been in prison, and he’s very afraid, which, of course, he should be. Short Eyes doesn’t make any easy choices at all, which makes for a particularly uncomfortable movie to watch. But it also makes it one of the gutsiest and most important films ever made, and it’s one of the best movies I’ve ever seen. It’s one of only two movies that I’ve ever watched twice right in a row. Well, the second time was with commentary by the director (and another man, whose participation in the film I don’t exactly know), because I wanted to know exactly how this film came about, and to confirm my guess that there was some kind of inside track to prison life behind the scenes. There was far more than I could have guessed; the commentary also ranks as one of the best I’ve ever listened to. A masterpiece.