Scars of Dracula (1970)
The best of the Dracula sequels 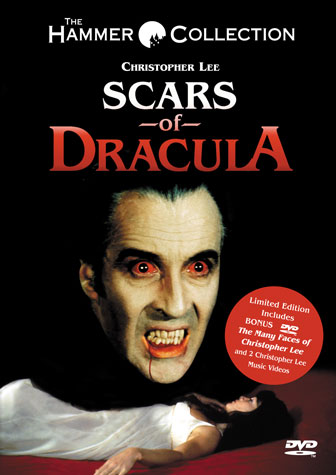 Review by The_Void
The problem with Hammer’s ever-popular Dracula series is that the sequels to the original classic all follow a set formula and are all therefore rather monotonous. However, luckily for this instalment Hammer have assigned one of their top directors; Roy Ward Baker, and you can always count on him for an entertaining horror ride.

The Quatermass and the Pit director has achieved something that didn’t seem likely after seeing all the other films in the series; he’s actually got Christopher Lee to appear for more than five minutes! Yes, that’s right the star of the show is actually the star of the show this time; and while he doesn’t actually lead the film, you do get the impression that you’re watching a Christopher Lee film. His performance is the usual mix of malevolence and over the top camp; and as usual, it’s very effective. Lee epitomises his character to such a degree that, Bela Lugosi aside, you can’t imagine anyone else in the role. And this is all the better when you consider that he’s in the movie for a while this time.

The plot is the same “Dracula gets resurrected, wreaks some havoc and then gets defeated until next time” that all the Dracula sequels follow; but this time the surrounding story is much more interesting than usual. We follow a young upstart who flees after being accused of rape and finds himself in a place that you really don’t want to find yourself; Count Dracula’s castle. Then, after he’s been missing for a while, his brother sets out to find him.

An excellent atmosphere that is full of tension gives the film a very foreboding aura, which helps it massively in capturing a horror feel. The way that Dracula’s castle is shown is fantastic, and the smoke effects and long shots of the castle itself are absolutely delicious. Adding to this is a very powerful musical score, which shows why Hammer are famous for their over the top music. Scars of Dracula is also notable for featuring most of the common vampire clichs such as the wooden stake and the cross.

One the whole, I rate this as Hammer’s second best Dracula film, second only to the original.

There are MANY things wrong with this film: 1) The plot is slight and heavily padded (even at 90 minutes) 2) There are some ridiculously fake rubber bats 3) The special effects are dreadful 4) With two exceptions the acting is even worse than usual for a Hammer film 5) Dracula stabs a woman vampire to death (why???) with an obviously fake knife and THEN drinks her blood. How could a knife kill a vampire? And WHY did he kill her?

This is considered the worst Lee Dracula film. I disagree. I think it’s one of the best. For one thing it is easily the goriest Hammer Dracula film (it was the first one to get an R rating here in the US) with some mild nudity thrown in. The violence is strong and savage and played to the hilt by Lee. Also there are two sequences that come directly from Bram Stoker’s original Dracula novel–Dracula sleeping in a room with no way in or out–except a window; and when Dracula climbs UP the castle wall from window to window. It was great seeing Hammer at least (for once) TRYING to get some of Stoker’s creation on screen. Also Patrick Troughton is very good as Dracula’s servant Klove and even Christopher Matthews has a few moments as the doomed Paul. But Lee’s acting is the main reason to see this. He has more screen time and dialogue in this than any of the other Draculas and he just gives out an incredible performance. You can’t take your eyes off him when he’s on screen.

Supposedly Lee and director Roy Ward Baker HATED this film (they blamed Hammer management for forcing them) but they shouldn’t. It’s very scary and well-done. Recommended