Satanic Rites of Dracula (1974)
Evil begets evil on the sabbath of the undead! 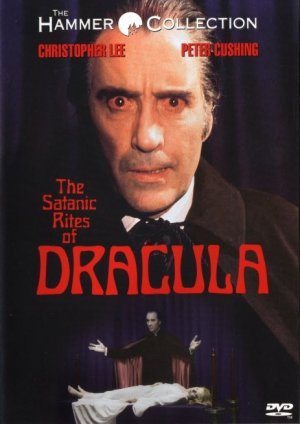 A mediocre offering with a good finale,
This offering in Hammer Horror’s Dracula series is often touted to be a lesser one, and for good reason; but all in all, I still enjoyed it. The film has a contemporary setting, with most of it taking place in and around a high-rise apartment block. This sets it apart from most of the rest of the Dracula series as the story usually takes place in a more proper period setting. I’m not sure if I’m completely at home with it moving settings; on the one hand, it’s original and that’s one of the things I like best about Hammer horror; but then on the other hand, it doesn’t fit the classic story and it also gives it a low quality feel. Anyway, the story follows Larimer Van Helsing, an ancestor of the original vampire hunter, who finds that the evil Count Dracula has been reincarnated and is secretly planning to unleash a fatal virus on the world. It’s very kitschy, but it has potential.

This film’s main problem is that it’s poorly plotted. The first half of the movie is relatively dull and little happens, but then it picks up in the second half, which leads up to a good finale. Although it’s good once you get past the halfway stage, it isn’t good as a complete piece of work because of the poor first half. The first half doesn’t feature many moments of horror either, which is irritating seeing as you’re watching a horror film. There’s lots of gunplay, but that’s massively out of place in a vampire film and to be quite honest, I don’t know what the script writers were thinking when they wrote that in. At the halfway point, we are treated to a nice sequence in a cellar that involves some female vampires, and that’s one of the best parts of the movie.

The great Christopher Lee vowed to never play Dracula again if the script wasn’t faithful to the original novel, and this film pretty much shows the reason for that decision. It’s a shame that this movie isn’t very good because it also features Peter Cushing, which pretty much makes it a big waste of two great stars. Cushing approaches his role with relish and almost looks like he’s having fun at times…but this is still a mediocre offering.

Like I said, it isn’t all bad; it picks up after the halfway point and the ending is very good…but I would only really recommend this to Hammer completest.

Not As Bad As Is Made Out,
The only problem I can see with this film is that it’s very far removed from the horror franchise that started with the original Hammer DRACULA in the late 50`s, in fact I can’t help thinking that it was conceived as a violent thriller that didn’t feature Dracula or Van Helsing. That might explain the slightly lame ending.

As it stands THE SATANIC RITES OF DRACULA does have some effective moments such as the opening escape scene and the plague victim, and there’s a very bleak feel to the film through out. If you compare it to the earlier films in the Hammer cycle your enjoyment of this one will be spoiled. So don’t compare it