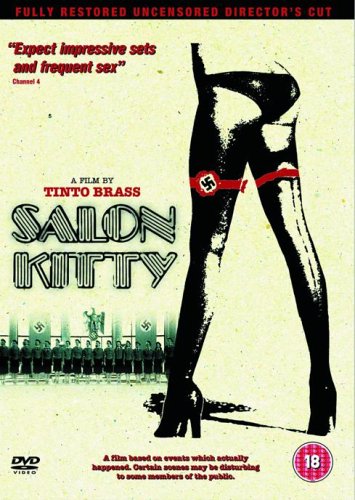 Brass’ controversial Nazi-sleazefest,
Made a few years before the even more notorious ‘Caligula’, this ‘Salon Kitty’ focuses on a more recent era of despicable history. Set in the earliest years of Hitler’s reign and the start of WWII, it handles about power-mad Nazi officer Wallenberg who puts Madame Kitty’s luxurious brothel in service of the ‘Third Reich’ and recruits a bunch of patriotic beauties to serve as prostitutes. But, instead of doing this as a favor for his fellow Nazi-superiors, he blackmails them with the information he gets by having the chambers bugged.

This film is infamous and hated because of its topic (I always heard it was as close to propaganda as you can get) and the explicitly of the sexual content. Granted, Tinto Brass does have a bizarre obsession for showing as much genitalia (female AND male) as possible but aside from a few sequences featuring deformed midgets, it’s never too sickening. The dullness is what bothered me here! The film is overlong and I wasn’t really anticipating all those Cabaret sequences.

The screenplay too often handles about pointless intrigues and the plot only gets REALLY interesting around the last half hour when the young Margherita unravels Wallenberg’s vile actions and conspiracies against him. Thank God for Theresa Ann Savoy! This stunning beauty (who also played a remarkable role in ‘Caligula’) makes this exploitation experience ten times more bearable because of her natural charisma and ravishing body.

If it weren’t for her, I’m sure the ratings for this film would be even lower.