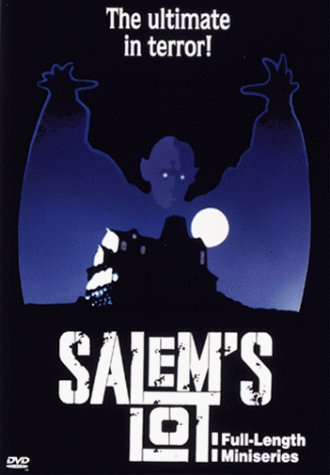 Stephen King’s bestseller SALEM’S LOT is a surprisingly complicated novel that first presents a detailed portrait of normal life in a small New England town–normal life that is gradually perverted when the town becomes infested by the undead. And with a cast that includes such memorable performers as James Mason, Lew Ayres, Elisha Cook Jr., and Marie Windsor, this 1979 two-part television special seemed to a great deal going for it. Unfortunately, however, director Tobe Hooper and his screenwriters are unable to find a way to streamline the novel’s numerous characters and subplots into any dramatic whole, and the result is a film that constantly references a host of characters, events, and ideas but seldom to any real effect.

Even so, the film does have its charms. Chief among them is James Mason in one of his final performances, offering a brilliant, sinister, and wickedly witty performance as Mr. Straker, the servant of the vampire. Ayres and Bedelia are also extremely good, and although Cook and Windsor are largely wasted they are nonetheless entertaining to watch. And the film does offer a few “jump in your seat” thrills: the scenes of child vampires floating outside bedroom windows are truly creepy, and the great vampire himself hearkens back to the silent film NOSFERATU in a most effective way.

Still, most viewers will find the film fairly tame. David Soul was not a memorable actor, the script is incredibly talky, and there are too many lose ends for the story to be satisfying. It will be of most interest to fans of King’s work who would like to see how television handled this, one of his most successful novels. A word of warning: there are two versions of this film. The “edited” version is virtually unwatchable; stick to the full-length.