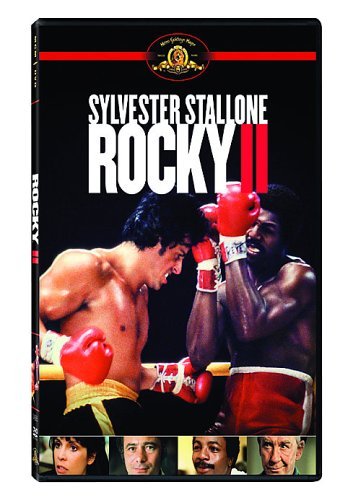 There’s one thing I want you to do for me
After pushing champ Apollo Creed all the way in their title fight, Rocky Balboa retires from the ring and basks in gallant loser glory. However, he soon finds he is down on his luck and accepts a challenge to a rematch with the ever irate Apollo Creed, something that is much to the chagrin of Adrian.

Judging by the rating and some of the comments here, it would seem that I like this sequel more than most, but I honestly feel this is a worthy sequel to the first {and much beloved} film. It still has credibility at its heart {something that would vanish as each further cash in sequel trundled out}, and crucially, it still has enough rags to riches nuance to keep the audience in its palm.

For sure it’s guilty of over sentiment at times, Adrian is now the ever loving wife, here pregnant and an authoritative voice in Rocky’s life. But this continues the emotional heartbeat from the first film, there is, when all is said and done, a quite beautiful romance at the core of the early Rocky movies. Rocky 2 extends that and utilises it to its benefit. When Adrian, after rousing from a coma, tells the big Italian tank to go win, it’s akin to some President or Prime Minister declaring “we shall not be defeated” It’s inspiring stuff, and of course it sets the wheels in motion for ultimate training and the mother of all punch ups with Apollo Creed. And of course Stallone, again writing and directing, gets to deliver the alternate ending from the first film.

Fanciful and safe it be, but Stallone closed down the 70s with a biff bang ball of strained sinews and heroic testosterone. Unadulterated entertainment to enjoy with a good pint of blood and a roast ox burning on the spit. 8/10