Robin and Marian – 1976
Love is the greatest adventure of all. 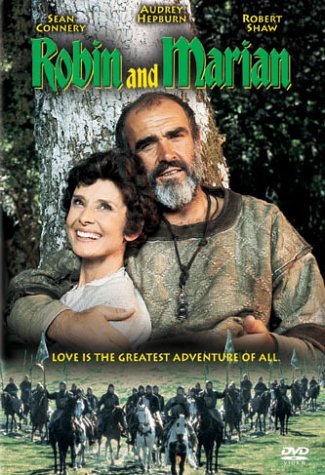 Robin and Marian (1976)
Check this out for a cast :
Sean Connery – Scotland’s greatest ever movie star
Audrey Hepburn – An iconic actress
Nicol Williamson – Many critics choice as Scotland’s greatest ever actor
Robert Shaw – Perhaps one of cinema’s most overlooked actors when it comes to playing convincing bad guys
Richard Harris – Another screen legend
Ian Holm – In an early screen role . Can anyone think of a more convincing and consistent English actor alive?

A great cast indeed but one that is not used to its full potential . Both Harris and Holm are very underused and their appearances at little more than cameos , and having a couple of heavyweight Scots playing the heroes does bring consistency to the characters ( Remember they’ve been together for years so why shouldn’t speak with similar accents ? ) but their performances tend to cancel each other out.

There is another slight problem and that’s the script. It seems to go against the legend of who Robin Hood was . People like to imagine that he was a good guy communist robbing the rich and giving the proceeds to the poor not someone who was a right hand man of Richard the Lionheart . I much preferred the mythical figure of the 1980s TV series that mixed myth and mystical plots . I also got slightly bored when the story started concentrating on the romance between Robin and Marion.

There was also a slight problem with the directing from Richard Lester where he tries to inject humour into the proceedings and it often fails . If I remember correctly this is something that spoiled his collabarition with Connery in CUBA , another movie that mixes action and romance with slight off beat humour

Having pointed out these criticisms there’s nothing much else wrong with ROBIN AND MARION , it’s just that when you’ve got a bunch of butch men in a forest who dabble in swordplay in 2004 you’re instantly reminded in some small way of a certain film trilogy that was released at the turn of the century which does spoil the positive aspects of this movie when watching it today.