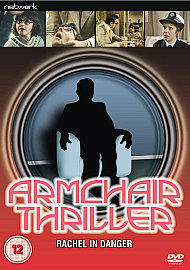 This was the first of ITV`s ARMCHAIR THRILLER serials which would start with the Thames TV landscape logo coming up on screen modified so that instead of being daytime it`d be night time . The title sequence of the show was fairly memorable of a darkened room with a shadow falling across a chair centered in the middle of the room then the shadow sitting in it . Suddenly the camera crash zooms onto the shadows face
If memory serves me right RACHEL IN DANGER is rather contrived . A man bumps into an old associate called Juan ( Played by Stephen Greif who BLAKES 7 fans will know as Travis ) so they go back to the man`s house where Juan murders him and steals his identity . It turns out Juan is an international terrorist whose group is going to assassinate HRH Queen Elizabeth the second a bit like THE NAKED GUN without the humour . It then turns out the murdered man has a daughter called Rachel who he hasn`t seen for many years who just happens to paying him a holiday visit on the day Juan murdered her father . Obviously since she hasn`t seen her dad for several years she won`t be able to recognise him . Being amidst such a dastardly plot involving world proleterian revolution Rachel is in danger of being executed to keep her quiet . The story ends with Juan from BLAKES 7 trying to shoot her majesty at a garden party with a gun disguised as an umbrella which explodes killing comrade Juan . Rachel walks away muttering that she put plasticine in the barrel
If Enid Blyton ever wrote sequels to THE NAKED GUN this is what it might look like