Race with the Devil

Race with the Devil – 1975
If you’re going to race with the devil, you’ve got to be as fast as Hell! 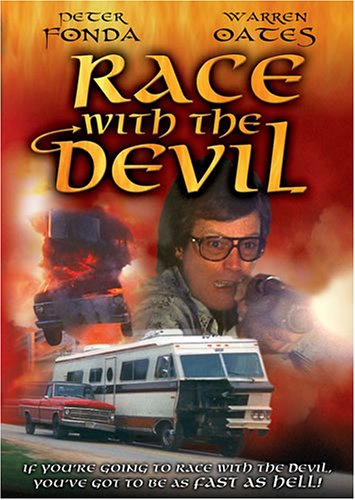 RACE WITH THE DEVIL has everything a cult film needs, unsubtle directing and acting, dialogue you can quote (“Didn’t anyone see anything? Didn’t anyone hear anything?. This was opened with a cold chisel so don’t tell me nobody didn’t hear anything”), and lots of violent deaths that are funny more than anything else.
The only problem with RWTD I have is the extremely silly ending that throws away common sense and will have you falling out of your seat screaming “Oh wait a minute how would that be possible?”. As the man in CASABLANCA almost said “In all the fields in all the world…” But don’t let this review put you off, as long as you don’t love dogs and snakes this is a very enjoyable paranoid thriller.

Race with the Devil (1975)
Review by Wayne Malin

Good drive-in movie,
Two couples are on vacation and driving around in a huge motor home. They are Roger (Peter Fonda), Kelly (Lara Parker), Frank (Warren Oates) and Alice (Loretta Swit). One night while camping they see a Satanic ritual where a young girl is murdered. The members of the cult find out and the couples spend the rest of the movie with witches after them to kill them.

The story is a little silly and the dialogue is pretty bad but this is the type of movie that used to pack them in at drive-ins. It’s full of action, fast-moving and has likable (if one-dimensional) characters. It’s basically a chase movie disguised and marketed as a horror film. The killing in the movie isn’t that explicit and the nudity in it is purposely blurred out-some people think it was edited from theatrical prints but it was always that way.

The acting doesn’t really matter–I mean who’s seeing this for the acting? Still all four actors give their all to this. The only thing that bothered me was Swit and Parker screaming nonstop when anything happens and letting Fonda and Oates “save” them. It’s quite amusing to see Parker being attacked by witches in this one since she played the evil witch Angelique in the “Dark Shadows” TV series in the late 1960s. The climax is either a perfect one or a lousy one. I’m torn between the two myself.

Quick and fun with a really incredible car chase at the end.