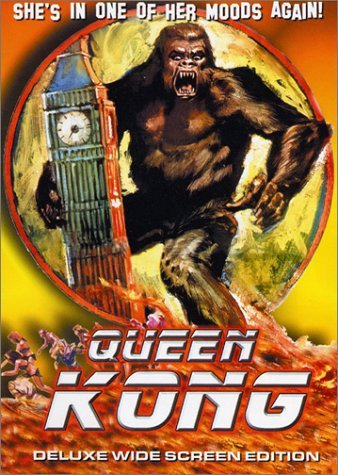 I wish I got drunk BEFORE watching this film
What happens when a big-shot film producer like Dino De Laurentiis orders to take a low-budget production like “Queen Kong” out of circulation, supposedly because it discredits his own remake of the classic 1933 film? That’s right, “Queen Kong” immediately became an immense cult-hit and probably a lot more popular than it ever would have been if De Laurentiis had simply ignored it!

This is one of the most deranged comedies ever, only you laugh at how ridiculous it is and not so much at the script-jokes or parody situations. “Queen Kong” looks fresh & funny for about 10 minutes; during the opening sequences in which you unexpectedly witness that women are the strong gender here and men are all just redundant and insignificant wimps. The humor stops right after the “Libertine Lady” song which, I admit, has some of the coolest lyrics ever (“Burn your bra…Burn your panties…Call your mum…Call your aunties”) and the rest of the film is amateurish nonsense and actually quite boring.

Watching this film is only amusing in case you’re severely drunk or under the influence of soft drugs, as it is a series of absurd gags that you simply can’t appreciate in a sober condition. The special effects are lousy and the monsters even look faker than the ones in the absolute cheapest Japanese Godzilla rip-offs.

It’s a real shame that several of the cast members agreed to star in this garbage. They all previously starred in good, solid Brit-horror films. The gorgeous Valerie Léon was in “Blood From the Mummy’s Tomb” and Linda Hayden (luckily, she only has a cameo) was in “Blood on Satan’s Claw” and “Madhouse”. The male lead Robin Askwith played in “Horror Hospital” and the regretfully underrated “Tower of Evil”.