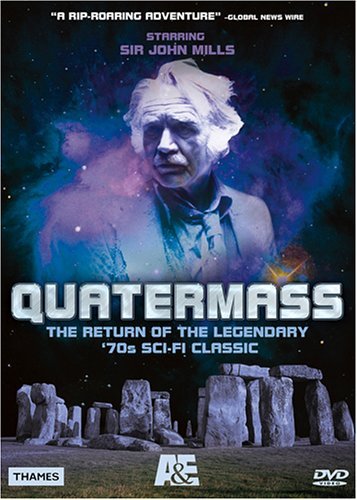 Look past the production values and see greatness!
Nigel Kneale wrote a story here equally as inventive and thought provoking as QUATERMASS AND THE PIT. Perhaps more cerebral and decidedly less horrific, but no less disturbing in its connotations. The concept of an alien technology “harvesting” the world’s youth for its own physiological needs is both original and brilliant in its execution. Like its forerunners, originally shown as a mini-series, this being an arguably effective re-edit!

Where the film cannot hold-up to its predecessors unfortunately, is that it was done “on the cheap” and much as I personally respect and admire Sir John Mills’ wonderful career (its unassailable highlights being the village idiot in RYANS DAUGHTER and Captain Anson in ICE COLD IN ALEX) for me, he doesn’t have the physical presence for the role of Professor Quatermass! Simon MacCorkindale additionally, is a bit on the wussy side for my money. But hey, let’s move on to the positives!

The setting of England, moving into a near post-apocalyptic state with anarchy ruling, the Police in the hands of Private ownership is pretty cool for 1978 – we’re getting there nicely! Mills portrays the old disillusioned and resigned-to-it-all Quatermass so well. Retired now, all he wants in life is to find his missing grand-daughter. When the first terrifying beam from space sucks up its first victims and destroys a joint Anglo-Russian Space project, he is summoned to assist the Ministry.

Kneale has his knee on the viewer’s neck at times as the beam returns for more of the world’s youth. Although the budget ran obviously to limited fx, the attack on Wembley Stadium leaves any aware and thinking person with real spinal tap! Again, Kneale resorts to an association with lore and magic and the images of the hippie-esque multitudes as they converge on Stonehenge singing “Huffity Puffity Ringstone Round” are as chilling as any scenes I have ever seen. Kneale reaches right out of the screen here and puts one in an arm-lock. You ain’t going nowhere, but WITH them to Ringstone Round!

Quatermass’ ultimate understanding of the code and what it all means is literate stuff, his plan to rebuff the alien threat sheer genius. Without giving anything away, the final scene with his granddaughter ranks as one of the most moving and shatteringly emotional scenes in film history. If you can’t SEE that, what a shame!