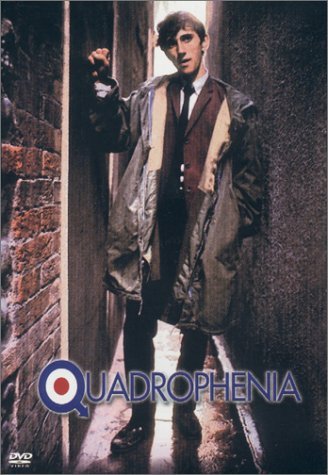 Quadrophenia (1979)
Not only a great adaptation of The Who’s landmark, but one of the greatest motorcycle movies ever made.

Franc Roddam, the director of Quadrophenia, did not disappoint me with his interpretation of The Who’s rock opera (unlike Tommy, which had it’s moments but didn’t was all over the map so to speak). He lets a viewer, who may not be entirely familiar to what occurred between the mods and the rockers in the early to mid 1960’s Britain, in on what the energy, the attitudes were like among the young and old. It’s not even classifiable as a rock opera as a film, because it becomes a hybrid- it’s part motorcycle flick, with some well staged, intense fight scenes, rumbles, riots, etc; it’s part anti-establishmentarianist take on what it’s like to be at an age when you don’t know what to do you with your life, and outside of the pleasures of being with friends and kicking’ ass you tend to be aimless or work for people you don’t like. It’s also, major in fact, a psychological character study of one of these anti-establishment kids, a mod named Jimmy (Phil Daniels), who may be a little off balance in the head due to a fueling desire to be both with the excitement of his gang and with his need to find himself by himself, as well as to the “blues” pills.

There isn’t as much of a story as there is character development, which sticks true to the source material, written by the clever and driving force of The Who, Pete Townsend. As Jimmy goes through parties, fights, a little love with a girl (Steph, played well by Leslie Ash), a riot, and problems with his parents and job, he enters a downward spiral. This is a tricky sort of story and character to pull off, because lay it on too thick and the audience could see the character as naive (and perhaps the character is, which makes sense in a sense), but add on the toughness and one-dimensional side of the biker attitude and it becomes a B-movie motorcycle flick. This doesn’t happen.

Somehow the elements come together in the film, with the performances (by the way, Sting’s debut performance is both mysterious and, ultimately, kinda funny), the documentary-style direction and editing (by Brian “Trainspotting” Tefano), and the music. The Who themselves serve as musical directors, and it’s highly interesting for both Who and non-Who fans in how they choose only parts of songs sometimes (Punk and the Godfather, Dr. Jimmy) and leave some out completely (Sea and Sand, Drowned, two songs I hoped would’ve made the final cut). By the time the third act reaches it’s heated peak, the music starts to perfectly embody what the character’s going through. It also doesn’t come off as cheesy due to the power of the songs.

Maybe I might be a little biased in writing this review- when I was around seventeen, eighteen years old, this was my favorite album behind Jimi Hendrix’s Are You Experienced. Besides it containing some of the Who’s most daring, somber, and fun work (5:15, Bell Boy, I’m One), the story was something that I could identify with strongly, as its themes are very knowing of what it’s like for any guy at that point of crossing the bend from childhood to adulthood. Not to mention it rivaled Tommy in its ambition via the compositions, the entertainment value, etc. So I was almost hesitant to watch the film, as I thought I might have my expectations raised too high and it would be too loosely translated and made as not my kind of rock musical (i.e. like Tommy). For me, the experience was contradictory to what I thought- I ended up learning more about this atmosphere, the essence of living in Brighton by the beach and feeling the need for competition, acceptance, and then anger and loneliness. By the end of Quadrophenia I looked at Jimmy as being a character in the tradition of Humphrey Bogart in Treasure of the Sierra Madre- an anti-hero that may be doomed, but a viewer can still care about him.
Overall, an un-expected treat, and will surely please both Who and non-Who fans alike, though for Who fans the added treat is that the the emotion and strength of the group and songs translate excellently in the film. A+

Excellent,
I hated this film when I saw it as a teenager back in 1979. The reason was the movie was realistic–too realistic! I identified (in some respects) with the main character Jimmy, and his life was bleak and depressing. Seeing it over 20 years later, I love it! It’s a superb mix of the 1960s British “Angry Young Men” films, the Who’s great album and 1979 sensibilities. It’s about Jimmy (excellent performance by Phil Daniels) and his friends. It takes place in 1964 London and there are constant battles between the Mods (Jimmy and friends) and the Rockers. The film is full of violence, sex, VERY strong language (good luck with the accents), anger, alienation…the works. However, there is a strong sense of humor (a break in at a drug store is hilarious) and it does have a (sort of) happy ending. But it is very dark and depressing.

The music score is excellent. It’s not just the Who, but other 1960s groups are used also. The direction by Franc Roddam is wonderful–it perfectly merges the music, imagery and story (especially with “Love, Reign Over Me”). My only real complaint–why not use the whole album “Quadrophenia”? Only about 1/8 of the two record set is used! Also interesting to see Sting in his first movie. Don’t miss this one!