Professione: reporter – 1975
aka The Passenger 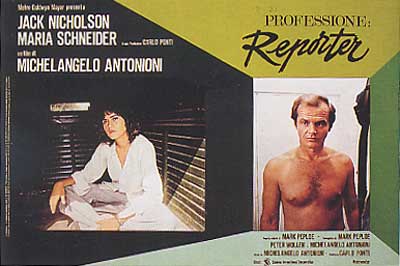 A must for art-film buffs, though it’s not a flat-out ‘masterpiece’,
And here’s why- a two hour film such as this, starring such undeniably superb talent such as Jack Nicholson and Maria Sheider, shouldn’t move THIS slow. I’m not saying the pace Antonionni places is entirely deliberate, but there were moments when I wondered when the film would pick up some of the suspense considering the weight of the situations Nicholson’s character was in.

Of course, this is not to downplay the overall effect that Antonionni and his crew give on a film like this: a lot of times his style of the wandering camera, or of a camera staying still on an object, is entrancing, even hypnotic, and one shot towards the very end is one of the best in all of movie history.
He uses his skills to tell a story of a journalist in Africa (Nicholson, doing what he can naturally do) who discovers a man he knew in a hotel is dead of a heart attack, and for reasons that are or are not quite explained, he takes his identity. What he doesn’t realize, at least until he leaves for Spain, is that the man’s persona was that of a gun runner.

The Passenger gives much to watch for the avid and non-avid film goer- a curious, often sullen and downplayed performance by Mr. Nicholson(outside of a outburst moment in the desert); a side role that isn’t as heavy but is as noteworthy for Ms. Sheider; and a style that is unquestionably of tremendous skill and potency. And yet, on a first viewing it’s own self-image gets distracting.

Perhaps this is one of those films that requires more than one viewing to let it all sink in.

Nearly as great as L’Avventura or Blowup, 24 February 2001

First off, I’d like to complain about this film’s lack of availability. It has been on VHS before, and in this format I rented it. It is not available now, though. It deserves to be on DVD. And if its director is not a good enough reason (Michelangelo Antonioni), it contains a masterful performance by Jack Nicholson, who has a very large fan base. He has done so much great work in his career, and The Passenger is among his very best, right up there with Chinatown and The Shining.

Anyway, to discuss the merits of this film: well, it is in a style much akin to Michelangelo Antonioni’s more famous films, especially Blowup. Thus the average viewer will find it about as interesting as staring at a blank screen. European art films often are not goal-oriented, i.e., there is not a goal set up near the beginning of the film that the characters are trying to achieve until the end. The Passenger is a perfect example. It actually teases those who are used to goal-oriented films by setting up a very intriguing premise, one that could have worked wonders for a Hitchcock film (in fact, it is somewhat reminiscent of North by Northwest in its plot): a man, Jack Nicholson, bored with his own life, decides to trade his in for the life of another man who has just died. Nicholson looks like the dead man, and the dead man had told him that he was basically a loner. This turns out not to be true. The dead man was an illegal arms dealer, selling weapons to rebels in Africa. The police, spies, and Nicholson’s friends from his previous life are all after him.

Wow, exciting, huh? Nope, not exactly. Antonioni is a great artist and has bigger themes to strive for.

I have been studying Antonioni for a while now, although his films are so hard to find that my studies have not gotten all that far. Nevertheless, let me share an observance or two. (slight SPOILERS ahead)

Characters in Antonioni films have a tendency to disappear. Anna from L’Avventura being the immediate example, I believe that she vanished on purpose. Not that I believe she got on a boat or committed suicide. I think she simply willed herself into nonexistence. Her life was going nowhere, and she wanted desperately to nullify her relationship with her boyfriend, Sandro. Thomas, the hotshot fashion photographer of Blowup, also decides to disappear, in my opinion (see my review of that film). He felt that his life had no point, also.

Now here is David Locke (Nicholson). He is a liberal, perhaps fashionably-liberal British reporter/documentarian (although he speaks with an American accent, for he was “educated there;” certainly the most ridiculous part of the film was this adhoc explanation) who is doing an expose/documentary on Africa’s political climate. He plays by the rules of reporting, only dropping subtle hints about the goverment’s corruption in his interviews while he certainly knows the truth of the situation. He proves himself a hypocrite in a couple of scenes, also, when he admits to Robertson, the man who will die and trade places with Locke, that he has no clue how to communicate with them (Robertson, an arms dealer, says simply that he offers them goods, and they understand that). There is also an amazing scene where we see Locke interview an African folk doctor who had

studied in Europe. He asks the man if he does and how he can still believe in his folk remedies when he has studied in a more sophisticated area of the world. The man replies, “You know, I believe your questions demonstrate more about you than my answers will demonstrate about me. Here, give me your camera, and I will record you asking those same questions.” We see Nicholson’s nervous face as his own camera is turned towards him, but we do not see him do what the man asked.

When he trades places with Robertson, he becomes the arms dealer. His goal had been to just escape his own life and maybe exist indifferently towards the world, but now he jumps into someone else’s life whose role in life is actually to do something about these African situations that Locke was almost pretending to care about.

It becomes more intriguing as it goes on. I don’t want to say everything, and, alas, I am not finished interpreting it in my mind as of yet. I am giving the film a 9/10.