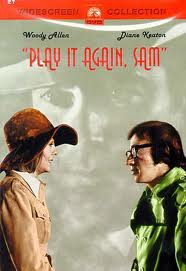 Allen plays a film critic who has been cruelly dumped by his wife. Je wants to meet other women but is very neurotic (no surprise there). He idolizes Humphrey Bogart who shows up from time to time to give him advice on dealing with woman. His best friends–couple Diane Keaton and Tony Roberts–try to help also. Naturally he ends up falling for Keaton.

Allen didn’t direct this (Herbert Ross did) but he wrote it. So it sounds like a Woody Allen film but doesn’t LOOK like an Allen film. For one thing it was shot in San Francisco–not New York! It’s also somewhat dated in 1970s dialogue and fashion. There’s also a running joke involving Roberts and telephones that doesn’t work today. Still this is a very good film.

It is an affectionate take-off on “Casablanca” and other old films also. Allen is playing has patented neurotic character but I’ve always found him funny and his disastrous dates are just great. Also him, Keaton and Roberts always worked well together and it makes their relationship seem very believable. And Jerry Lacy is VERY funny playing Bogart and giving Allen advice.

If you don’t like Woody Allen movies this probably won’t change your mind. But I found it fast, funny and very entertaining. And the dated 70s touches were actually quite funny. I give this a 8.