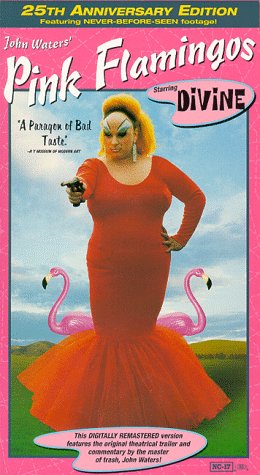 Like those who listened to radio reports about the attack on Pearl Harbor, every one who has ever seen PINK FLAMINGOS can tell you exactly where they were when they first saw it–and some thirty years later the movie is still one of the most unspeakably vile, obnoxious, repulsive, and hilariously funny films ever put to celluloid, guaranteed to test the strongest stomachs and the toughest funny bones.

Filmed with a close-to-zero budget and some of the shakiest cinematography around, PINK FLAMINGOS tells the story of two families that compete for the tabloid title of “The Filthiest People Alive.” Just how filthy can they be? Plenty: the film includes everything from sex with chickens to what I can only describe as a remarkable display of rectal control to a heaping helping of doggie doo, and I guarantee that you won’t want to eat an egg for at least several weeks after seeing it.

The cast is either wonderful, atrocious, or atrociously wonderful, depending on how you look at it. The star, of course, is Divine… and to describe Divine as the BIGGEST drag queen on the planet would the understatement of the year. She is a mammoth creature given to BIG eye makeup, BIG orange hair, and BIG expressions–she is the Charleton Heston of drag, and whether she is almost running down a jogger, pausing to use the bathroom on some one’s front lawn, or startling real-life shoppers by taking a stroll along a Baltimore sidewalk she is both unspeakable and unspeakably funny. Others in the cast include Mary Vivian Pearce, Danny Mills, and the ever-appalling Edith Massey as members of Divine’s family; and Mink Stole and David Lochary as the white-slaving, baby-selling couple who challenge Divine’s status.

It should be pretty obvious that PINK FLAMINGOS is not exactly a movie that will appeal to just every one, and viewers who know director John Waters only through such later films as HAIRSPRAY and CRYBABY will be in for a major jolt. But if you want to see something so completely different that even Monty Python couldn’t imagine it, this is the movie for you. Just make sure you eat before you see it, because you probably won’t want to eat afterward–and you might want to keep a barf bag handy just in case.

A must-see—-kind of,
Babs Johnson (Divine) lives in a trailer with her son Crackers, her daughter Cotton and her mother Edie (Edie Massey). She’s in competition with a couple named Connie and Raymond Marbles (Mink Stole, David Lochary) to be named the filthiest person alive. The film shows their attempts to outdo each other.

This film is very much NOT for everyone. It’s a in your face no holds barred assault in bad taste. Crackers has sex with a woman with a live chicken between them while his sister watches; the Marbles pick up female hitchhikers, impregnate them, keep them chained in the basement and sell the babies to lesbian couples; Divine and family have a party which includes cannibalism etc etc. It’s disgusting but, in a way, not unwatchable. It’s SO over the top and is so unapologetic about it that it’s kind of fascinating. As director John Waters might say, it’s bad taste done well. Also it’s kind of amusing to watch–the acting is so wretched (especially by Massey) that you just watch it in disbelief. A friend laughed out loud at how bad Massey was (she improved in later pictures).

This is NOT for people who are easily offended. Even though it’s over 30 years old it’s STILL shocking. However if you have an open mind and can take a lot of extreme behaviour this is a must-see. The only part that really was too much is what Divine does at the very end.