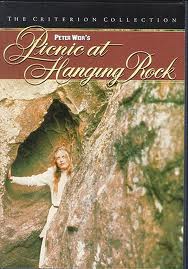 Stylish as a prisoner on death row walking the “green mile” in an Armani suit!
Though obviously not to everyone’s taste, evidence I suggest, that it functions along anything but broadband, hence many miss the signal! I still believe unequivocably that this is not only Peter Weir’s finest moment (forget the curiously bland and soul-less TRUMAN SHOW) but the most significant if not stunning movie, yet released in Australia. It remains well up in my top 20 films of all time.
The story? three girls disappear during a picnic at Victoria’s Hanging Rock in the late 1800’s! Sounds intriguing doesn’t it? Don’t look for intrigue! Don’t look for action, dynamic twists, UFO’s, purpose or even an EXPLANATION! Just take-in what you see!

“Eerie” doesn’t cover it! Is this horror? psychological drama? cinematic art? over-the-top poetic license concerning the real disappearance? Fact is, its anything you want it to be, but if it doesn’t reach out and compress your emotions at various points, then perhaps you are either dead, a clone or just plain way down the brain chain!

There has NEVER been a film like PICNIC AT HANGING ROCK that so stylishly and culturally presents a bygone era with its niceties, eccentricities, cruelties and yes, simplicites! Performances are absolutely spot on from Rachel Roberts tortured school principal Ms Appleyard to the ultra feminine and immaculately turned-out Helen Morse as M’selle Ms Poitier.

The costuming is quite magnificent and as so many have commented, there is a mesmerising influence exerted by this film – on certain viewers. You cannot look for a rational explanation here but you are free to interpret whatever you wish. This was Weir’s legacy. I have seen this film probably 30 times and like a magic mirror, can see more in it each time I look!

There’s not too much to say about Picnic at Hanging Rock. It’s one of the most beautiful films ever made. Technically, it’s perfect. The cinematography is godly, and the musical score, much of which is performed by Zamfir, master of the pan flute, is exquisite. It’s also wonderfully directed by Peter Weir – he shows a talent far beyond what I saw in The Truman Show, which is unfortunately the only other film by him I have seen. Hopefully, that will be remedied soon.

What I didn’t get was the actual point to the film. A film doesn’t necessarily need a point, but this one seemed to be trying to say something, but it was never clear what. As near as I can tell, the metaphorical and allegorical content had to do with the state of repression these women were suffering. The camera even lands on a photograph (or portrait) of Queen Victoria at one point near the end of the film. However, if this is the case, it seems kind of pointless to criticize those values. I don’t know when the original novel was written, but the film was made three quarters of a century after the events had taken place. Oh, and, by the way, is this based on a true story, I wonder? If there was another point or metaphor being developed, the writers failed to express it.

But who cares? Picnic at Hanging Rock is an amazing piece of filmmaking. That’s what’s important, and that’s where it succeeds. 9/10.