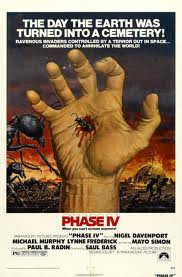 Nothing gets me off more than confirmation of the spread of limited human intelligence!
PHASE IV is one brilliant and totally underrated movie. It is a THINKING persons flick not for those who really should be watching THE BLOB! The concept of an alien intelligence harvesting the collective interactive mechanism that enables ant colony communication and functionality, is just plain INSPIRED!

The effects without the option then of CGI were outstanding as were so many images in the film. The “hand” sequence and the sleeping girl especially!

At the session I actually saw this film at back in ’73, half the audience were fidgeting and totally numbed out by it all. Afterwards as they filed out, still stuffing chips in their face, the usual statements wafted across to me, “Huh? what was all that about then?” and “Jeez, what a bore hun!”

Saul, if you’re out there. You done real good with this one son!