Phantasm – 1979
If this one doesn’t scare you, you’re already dead! 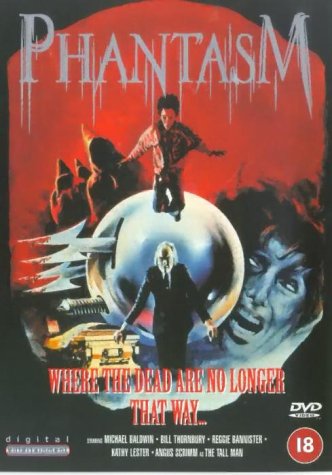 Phantasm and its sequels is a popular horror-series, but not as big as the obvious franchises such as Nightmare on Elm street, Halloween or Friday the 13th. And that’s a good thing because you can’t really compare this ingenious muddle with mainstream slashers. Phantasm is a complete one-man Don Coscarelli project with a good share of morbidity, humor and extravagance…all brought together in one major cool looking packing.

The plot simply has to be to be believed.

The Tall Man (terrific charismatic performance by Agnus Schrimm) is some sort of nightmarish grave robber. Immensely strong and ghoulish as he turns corpses into ugly little dwarfs, before shipping them out as intergalactic slaves! How does this rate on your originality scale?!? Phantasm contains other (already legendary) elements such as the deadly flying spheres that plant themselves into the victim’s forehead and then perpetrates the brain. A pretty violent thing to see, but even more appealing when you’re a horror fan.

Regretfully, Phantasm also suffers from a few overwhelming negative aspects. Like the uninteresting main characters of the boy and his older brother. The stress isn’t laid on The Tall Man in this first episode yet, and the ultra-cool Reggie (an ice-cream vending guitar player with a ponytail) hasn’t got that much screen time, neither. The finale is a big letdown and a bit too confusing for a late 70’s horror film. So far, 4 sequels have been produced. The first one (released in 1988) is a highly recommended film with an overload of macabre splattering and black humor.

At times, this first sequel was even funnier to look at than the original. All the other sequels can easily be skipped.

In it’s own way, a horror classic
Two orphaned boys, Mike (Michael Baldwin) and Jody (Bill Thornbury) notice some strange things happening at Morningside Mortuary. Bodies are disappearing from coffins; a lady in lavender has sex with men in the graveyard and then stabs them to death; little midgets in brown cloaks (making sounds like lions) are roaming about and there’s a flying silver orb with spikes that embeds itself in people’s heads! And then there’s the Tall Man (Angus Scrimm) overseeing it all…Soon Mike, Jody and their friend Reggie (Reggie Bannister) are fighting for their lives…

The story is pretty thin (and REALLY out of whack at the end), the acting dismal, there’s no characterizations or depth and some of the special effects are horrible but…this is STILL a classic horror film. It takes a while to get going (nothing much happens in the first half hour), but when it does there’s scarcely a letup. Action leaps into high gear, there’s some fairly graphic gore (including the now infamous flying sphere killing), there are plenty of scenes guaranteed to make you jump and the music score is very spooky…right up there with “Halloween”. Also some of the special effects are impressive (considering there was no budget). Also Michael Baldwin was a VERY attractive man and there’s gratuitous male and female nudity. What’s even more surprising is Don Coscarelli wrote, produced, directed AND edited this at the age of 24! He’s never matched it since and all the sequels really suck…but this stands alone as a classic. A must-see for all horror fans. Also Scrimm is EXCELLENT (and damn scary) as the Tall Man.

Trivia: This was awarded an X rating FOUR TIMES because of the sphere killing…Coscarelli went all the way to the head of the ratings board who overturned it and gave it an R–a rare occurrence that the ratings board kept in a gore scene!