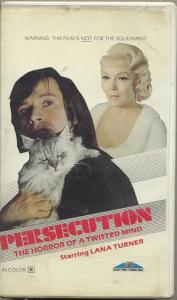 Not Scary In The Least,
Halloween is upon us so the TV companies dust off a few horror films for late night showing . Last night saw the BBC broadcast THE WOLFMAN while tonight ITV transmitted a clichd horror movie called LONG TIME DEAD with BBC 1 showing PERSECUTION.

As a horror film / psychological thriller totally fails because it uses something ridiculous as the focus of fear . The bringers of terror are
CATS !!!!!!!!!!!!!!!!!!!!!!!

That’s right . Cats . You know these fluffy cute mammals that sit in your lap making purring noises when you tickle their chin ? Well that’s what the creatures of horror are in this movie . I’m not making this up and I also wish to point out that they’re not ten foot tall mutant demon possessed killer cats , they’re the type of moggy you see sitting out on window ledges in the summer.

I know some people have an instinctive fear of felines , it’s to do with the way they look at you , almost like the cats are planning something when you’re back is turned . I don’t know how anyone can believe this because I find cats the most affectionate type of pet and no matter how hard the director tries he just can’t make moggies appear menacing in any way.

I feel rather sorry for the late Ralph Bates since he also appeared in an awful horror movie shown on BBC 1 a few nights ago called I DON’T WANT TO BE BORN and looking at the actor’s resume he has appeared in a lot of crap early 70s Brit horror movies . To give you a taste of how bad PERSECUTION is check out this sample of dialogue.

Believe it or not the above lines weren’t meant to induce a laugh , though inevitably they did.