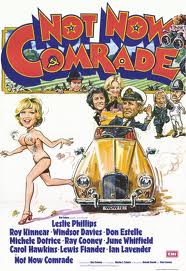 Budget ? What Budget ?,
This has got to be one of the lowest budget films ever produced in Britain, and considering it’s a British film that is indeed saying a lot. In fact it’s somewhat insulting to consider NOT NOW COMRADE a ” film ” since as someone mentioned it’s a stage play. It’s like someone has gone into the local theatre with a film camera and started filming. The interiors resemble those you’d see in a theatre and you can clearly hear the CLUMP CLUMP CLUMP as the actors run around the wooden floors like you would in an auditorium.