Night Train Murders
aka
Ultimo treno della notte, L’ – 1975
Most movies last less than two hours! This is one of everlasting torment! 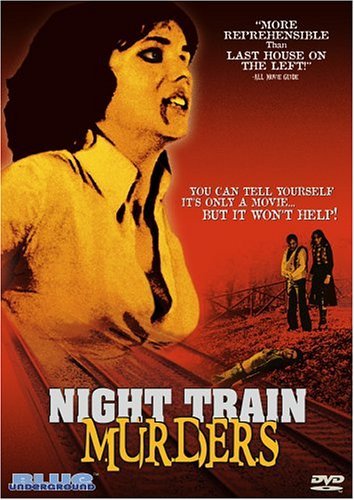 Well intended, but painfully bad “revenge”-rip off…
Well, I was planning to provide this review with the title “Last Train on the Left” but that seems to be a pretty obvious choice. Night train Murders tries to pick in on the success of Wes Craven’s milestone as close as possible. They even managed to find a main villain resembling David Hess, who played the merciless bastard in Craven’s film. The film means well and all but, it just lacks the budget, talent and inspiration to become of any importance. The entire first hour (in which two girls travel to Italy by train, in order to celebrate the Holiday season) completely lacks suspenseles or depth and it seems to be endless.

Eventually, the girls are being humiliated and tortured by two madmen and a nympho-bitch. From then on, everything goes rather quickly and, before you know it, the father of one of the girls already avenged the death of his daughter. Totally “Last House on the Left” in other words…only less fascinating and only half as disturbing.

Although it looks like a sleazy Italian production, the film hasn’t got much violence or bloodshed in it. One scene is pretty disgusting to watch and you’ll recognize which one I mean immediately. Besides that, it’s nothing more but a waste of a terrific musical score by Ennio Morricone. Avoid! Unless your a fan of rare cult stuff of course