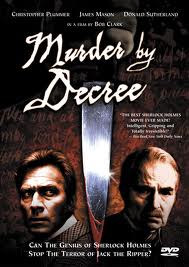 Film pitches Sherlock Holmes (Plummer) and Dr. Watson (Mason) into the hunt for Jack the Ripper in Whitechapel, London 1888…….

I’ve been exploited old fellow, by the very people for whom we are searching.

The greatest of detectives searching for Britain’s most notorious serial killer, it’s a killer pitch that had already had a film made in 1965 called A Study in Terror. That was a film that couldn’t quite get it right, here, 14 years later, there’s a bigger budget and “A” list gloss to help tell the tale. And boy does it work! In the cannon of Sherlock Holmes, Murder by Decree is to Holmes films what On Her Majesty’s Secret Service is to the James Bond franchise. Appertaining to the great detective himself, it’s the odd one out, a divisive picture, not because it’s rubbish or technically shy, but because the main man protagonist dares to be human, a man of conscious; politically, socially and ethically. He’s still the same charming, clever and complex character most have come to know and love, but Murder by Decree fronts him out as a human being, with Watson alongside him as a non buffoon bloke doing his bit for the case whilst remaining sensitive about the last pea on his plate! It’s these characterisations, splendidly played by two actors of considerable talent, that are at the core of the film’s success.

If she dies and you come under my hand? Expect no mercy.

Period production value is high, it has to be for a Jolly Jack based movie. Bring the dark, bring the smog and bring the Victorian costumes (Judy Moorcroft). Then play it out amongst shadowy lamp lighted cobbled streets and let the sets drip with slum London sweat and tears. All that is required then is to have a source story of compelling interest, of which Murder by Decree scores greatly as well. It’s fanciful for sure, but the most spectacular of all Ripper theories. From a secret love child to the Freemasons, and up to Royalty itself, it’s a potent notion put forward. That is of course conjecture as a solution, but the makers are to be applauded for taking that idea and successfully combining the Arthur Conan Doyle creations with historical reality, something that A Study in Terror fell considerably short on.

Rest of the cast is filled out with some quality as well, where Hemmings, Quayle, Finlay, Gielgud and Bujold don’t disappoint, the latter of which gets to really perform with substance in the pivotal scene set in an Asylum. Only real let down is Sutherland, or more like what the makers did (didn’t do) with him. His psychic Robert Lees crops up for a couple of small scenes for what we expect will be a telling contribution to the plot, but they aren’t. It seems like just an excuse to do Sutherland up like he had just awoken from the grave, and to give the picture some ethereal sheen moments. For the finale and the big reveal of the Ripper, Plummer is simply magnificent. He holds court in front of his peers, including the Prime Minister (Gielgud), and unfurls the explanation with impassioned fortitude, it’s then that we realise this was always a Sherlock Holmes movie, and not a Jack the Ripper piece. With that, it’s one of the best featuring the Deer Stalker wearing fellow. 8/10

Sherlock Holmes vs. Jack the Ripper,

In 1888 London, Sherlock Holmes (Christopher Plummer) and Dr. Watson (James Mason) are asked by a citizen’s group to find and stop Jack the Ripper. For some reason the police don’t want Holmes to investigate. However he does and as the bodies pile up Holmes and Watson slowly uncover a trail that might lead to the highest reach of British government.

This was released and died VERY quickly in 1979. I’m probably one of the few people who saw it in a theatre. The critics almost unanimously praised it, it had a huge cast of good actors…but it just died. That’s too bad because this is a very good Sherlock Holmes film.

It’s atmospheric (LOTS of foggy streets), has exquisite production design and is beautifully directed by Bob Clark (I love the way the first murder is done–very effective). Also the acting is great. Plummer gives a very good, different interpretation of Holmes–he makes him more emotional than other actors have…but it works. Mason nicely underplays the role of Watson–he does not make him a bumbling fool like Nigel Bruce did back in the 1940s. In small roles Susan Clark, John Gielgud and especially Genevieve Bujold are excellent. Donald Sutherland, Anthony Quayle and David Hemmings unfortunately are not that good.

There are some problems with this movie though. It’s too long (a long sequence involving Watson and some prostitutes could have been completely cut) and is needlessly convoluted. Also they throw politics in the plot which seems out of place. And, strangely, Holmes’ deductive reasoning is almost never used. He comes across more as a protector of the people than a detective. Plummer’s performance though carries it through. It’s quite bloody too–not enough for an R rating but pretty strong for the PG it got back then (PG-13 wasn’t a rating yet).

Reservations aside though, I think this is one of the best Holmes’ film ever made. Recommended.