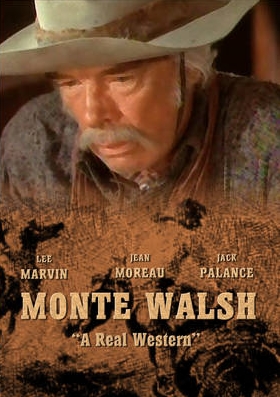 I ain’t spitting on my whole life

Monte Walsh is the debut feature of cameraman-turned-director William A.Fraker. It stars Lee Marvin (Monte Walsh) & Jack Palance (Chet Rollins) as two ageing cowboys who find that the era of the cowpoke is coming to an end; and that work for them is now very hard to come by. Adapted by David Zelag Goodman & Lukas Heller from Jack Schaefer’s novel, Monte Walsh is a gentle, but astute, telling of men who have outlived their time {think Will Penny/Ride The High Country}. Tho very sedate in pacing, and almost elegiac in tone, the film constantly remains interesting because the characters are so well written. That they are given quality portrayals by Marvin & Palance, the latter of which is nicely cast against type, is possibly of no surprise to most genre fans. But both actors push themselves to really make the film work, even exuding believability in the process. Thus when the story takes its potent laced turns we are with them all the way, for better or worse.
httpV://youtu.be/9GuNfq451Kw
John Barry provides the music and the film opens with a delightful and ironic tune called “The Good Times Are Comin” sang by Mama Cass. The cinematography is by David M. Walsh, where he nicely manages to make the Tuscon part of the shoot blend with the emotional state of our protagonists. And decent support comes from Mitch Ryan too. There’s also much humour in the piece, such as a cooks revenge that is laugh out loud funny. While there’s action moments like a taming a bronco sequence to ensure the story is not solely interested in playing out as a sad atmospheric tale.

But it’s really all about Marvin and the character he plays, with Fraker guiding him to emotional depth, Marvin makes Monte Walsh an essential viewing for fans and interested newcomers alike. 7/10