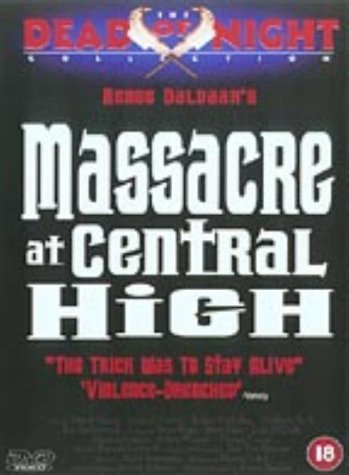 NOT the typical and silly kind of high-school slasher you expect to see!
Without having seen this movie, a righteous first impression would be that this is a vile and ordinary 80’s slasher…only made in the mid-70’s. Well, you’ll be pleased to learn that this assumption is wrong! Even though the vicious-sounding title and the short summary on the back of the VHS imply the opposite.

“Massacre at Central High” actually is an intelligent and subversive portrait about a youthful generation and the giant gaps between them. Yes, in many aspects this really is an ahead-of-its-time slasher in which numbnut school kids get slaughtered in the most inventive ways, but the basic premise leans closer to the typically 70’s revenge flicks and – and this is really special – the wholesome it forms is something entirely new and unique: an ambitious and moralistic exploitation flick.

Set in a Californian high school, seemly without teachers or other staff, the new kid in town David becomes the target of a trio of bullies. These three already besiege and terrorize the rest of the school population, but with David they go so far that they eventually cripple his legs in a cowardly attack. Driven by revenge, David literally pulverizes the bullies but – just when he thinks to have brought peace inside the school’s walls – the former nerds become the new bullies and they all wish to be in control of the schoolyard…

I sincerely doubt whether writer/director Rene Daalder fully intended it to be like this, but his film gained a solid cult reputation because it features so many effective political metaphors! Especially since there are absolutely no adults in sight (no parents, police men or teachers), “Massacre at Central High” is like the perfect allegory on society, with its corruption and typical hypocrisy. Still, this is not a great film…and that’s largely due to the total lack of budget and craftsmanship. The dialogues are poorly written and the acting is far below average.

Although Daalder often succeeds in creating a suspenseful atmosphere, still too many parts of the movie are tedious and lead nowhere. Most of the actual killing sequences are imaginative, but they’re too bloodless and the special effects are ludicrously fake (the rock rolling off the cliff and crushing a tent!). If you purchase this film because it looks so much like fun splatter flicks like “Prom Night” or “Graduation Day”, you’ll feel very cheated, that’s for sure. But, either way you look at it, it’s a curious gem.

Where has this disappeared to?,
I caught this neat little revenge film on cable back in the early 80s and have never forgotten it. It’s a combo teen/horror/revenge movie.

A bunch of bullies generally run the school and terrorize the students (the teachers are never shown until the end). A new kid in school refuses to buckle under to them. They cripple him. They figure he’ll now take orders…right? Wrong. He takes a disturbing, bloody revenge on them…and things really go out of control.

There’s more to it, but I don’t want to ruin it. This movie actually carries a strong message about power and its use (and abuse). Well-acted by a very good cast (even Andrew Stevens!) and well-directed on a very low-budget (it does show).

This is a big cult movie and a perfect example of the type of movie they showed in drive-ins (remember them?) in the 70s. Well worth seeing. Good luck finding a copy–I don’t think it’s on DVD yet and the video is long out of print.

Look for Lani O’Grady (from “The Waltons” TV series) doing a topless scene!