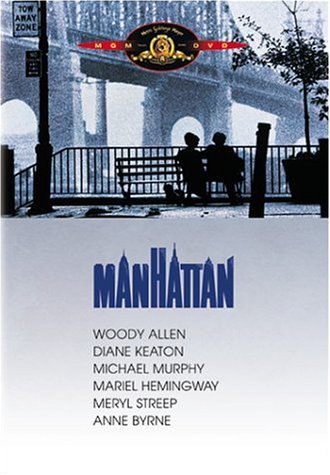 Possibly Woody’s best, one of the best of the 70’s,

Woody Allen’s Manhattan is a testament to the great city, and I liked it alot. It flowed like a play, and much of it was funny, some was sad, and some was interesting. The plot gets confusing, but that was good, because the viewer (me) can get enchanted in Woody’s fascination with New York (led powerfully by the great music of George Gershwin). Well written, well directed and well acted, this film might be his best masterpiece to date (it’s one of my fav’s).

Next to “Annie Hall” this is Woody Allen’s best film,
Allen plays Isaac Davis a 42 year old who’s dealing with his lesbian ex-wife (Meryl Streep!) writing a tell-all about their relationship and his sexual relationship with a 17 year old girl (Mariel Hemingway). Also his best friend (Michael Murphy) is having an affair with a VERY strange (but very funny) woman named Mary (Diane Keaton). Davis meets Mary and falls in love with her–but what about his best friend and the 17 year old?

Just perfect. It’s filmed in beautiful black & white with just superb cinematography by Gordon Willis and great direction by Allen (it’s a crime they were ignored by the Oscars). Also the wonderful music of George Gershwin is used perfectly on the soundtrack to match the images. The script (Oscar nominated) is sharp, intelligent, hilarious and painfully true at times. Its comments on love, life and happiness are right on target. “Annie Hall” was funnier but this movie is, in serious matters, better than “Annie”. Also the b&w and music with the script gives some scenes a very romantic feel (this is a perfect date movie). The picture is spellbinding from start to finish.

The actors are just great. Allen is great with the comedy BUT he’s not that good of a dramatic actor–some scenes don’t work all that well because of this–but they DO work. Keaton is just superb in her role. She’s funny, sad, intelligent…and just wonderful. Hemingway was just OK here–but she WAS nominated for an Oscar. Murphy is very good as Davis’ best friend and Anne Byrne as his wife is also good (but she’s given nothing to do). Also seeing Streep in an early role is fun and Karen Allen appears (unbilled and no dialogue) in a TV show bit.

This is a must-see just for the imagery alone–Manhattan itself has never looked this good. A true classic, full of wonderful dialogue and one great scene after another. Don’t miss this one!

Also don’t let the R rating fool you–this is pretty tame. There’s no nudity, sex or violence and Keaton swears only 3 or 4 times…but having a 42 year old sleep with a 17 year old was pretty extreme for a 1979 movie. It would probably get a PG-13 now.