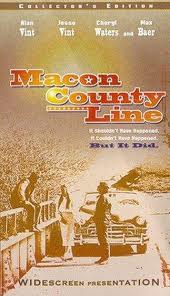 Huge drive-in hit,
Despite what people have been saying this movie was a big hit when it came out. There was even a sequel a few years later. But it was only a hit at drive-ins and (like other drive-in hits) has been largely forgotten. That’s a shame because it’s a really great movie.

It’s not based on a true story (despite what they say at the beginning and end). It’s bloody, violent and made on virtually no budget. It all works though because you get four believable characters–the two brothers (real life brothers Alan and Jesse Vint), the hitchhiker (Cheryl Waters) and the sheriff (Max Baer Jr.). They all give natural, unforced performances and through the dialogue you get to know them and understand them. The script is very well-written. Still, this IS a drive-in movie so it opens with a sex scene including flashes of male and female nudity. And the last half hour is frightening and includes a neat twist at the end.

A very good film that deserves to be rediscovered. See it!