Love Letters from a Portuguese Nun 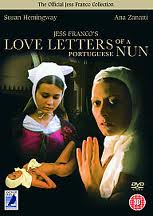 Holy Moses!
Tsk, tsk…. My poor, old and deeply religious granny should know what I’m watching here. Nunsploitation! Foxy looking nuns doing tricks with their willing and ravishing bodies, in blood-soaked and satanic-themed movies! Blasphemy, my old granny would call it…and she would be right as well.

Call it what you want …it’s still fun! It’s pretty deranged to see a bunch of nuns bringing sacrifices to Satan. And it’s even more messed up to see Lucifer actually appear then and sexually violate an innocent young disciple.

Who else than Jess Franco could have been responsible for this? The Godfather of Sleaze tried out every subgenre of eurohorror in his long, fertile career and this stylish, well cinematographed film represents his bizarre nun-fantasies.

Which brings me to the MESSAGE of this film! Yes indeed, message! Jess Franco’s films don’t often carry a message but this `Love Letters from a Portuguese Nun’ does. Franco directly criticizes the historical hypocrisy of the Catholic Church and shows how Catholic superiors abused their powers.

This really is one of Franco’s finest achievements. Although the film exaggerates extremely when it comes to sleaziness and absurd situations, it also brings forward a lot of style and beauty. The acting is above average and the locations are beautifully chosen. The best aspect about the whole film is the truly magnificent music by Walter Baumgartner, who made a career out of filling exploitation soundtracks.

Love Letters from a Portuguese Nun may not be top-quality cinema, but it shows a lot of goodwill and depth. And it’s beautiful to look at. Hallelujah!