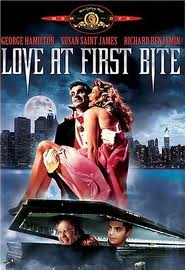 A rarity…a film with nary a distasteful moment!
Quite incredible this was made the same year as ALIEN. Seems a couple of generations earlier – a real throwback to 50’s and 60’s “family” movies.

Totally watchable and entertaining flick (which is somewhat MORE than can be said for Hamilton’s follow-up, ZORRO THE GAY BLADE). The strength of the film lies in its principals. Hamilton as suave and out-of-the-20th-century-loop Count Vladimir Dracula, Susan St James in what was inarguably her best screen role as NY super model Cindy Sondheim, and ever-funny Richard Benjamin as Dr Jeffrey Rosenberg..a distant relation of Dr Van Helsing no less!

Both are in love with Cindy who is torn every which way emotionally, even allowing for her understandable concern as to the restrictive life of a bat in general. The interplay between Hamilton and Benjamin is often priceless. The film never really aims to be anything more than what it is – a lightweight romantic comedy with bite, and this becomes it well. Particularly cheerful little ending which adds pep!

Always to be remembered for the disco sequence and I LOVE THE NIGHTLIFE which still conjures up for me so vividly those dance-floor scenes. No way a masterpiece – simply a film which holds very pleasant memories for many people I imagine.