Logan’s Run – 1976
Welcome to the 23rd Century: A perfect world of total pleasure, With just one catch… 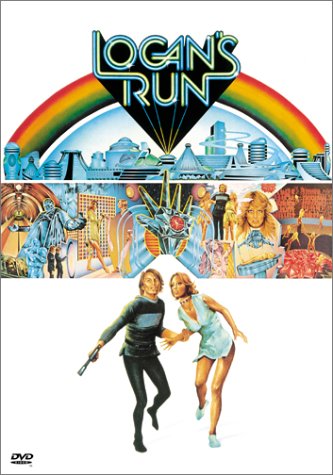 Plot:
· Logan, a Sandman (police assassin), is forced to search for “Sanctuary” – a place to which people have apparently escaped from the sealed city of the future in which he lives. Jessica is caught up along the way and becomes his companion fugitive as they are both pursued by Francis, a fellow Sandman. Sanctuary is not what they expect.

· It is 2274. Some type of holocaust has decimated the earth, and the survivors sealed themselves into a domed city near Washington, D.C. To maintain the population balance, the computers that run the city have decreed that all people must die at 30. This system is enforced by “sandmen” : black-clad police operatives who terminate (kill) “runners” (those who attempt to live beyond 30). Logan, a sandman, is sent on a mission to find “sanctuary,” which is a code- word used by the master computer to describe what it believes is a place to which runners have been escaping. Logan begins to question the system he serves and after seeing for himself that there is life beyond the dome, he returns to destroy the computer.

· In the year 2274, after the world has been decimated by a holocaust, a new society is built and resides in a domed city. However, it is forbidden for humans to live beyond 30 and you are given two choices, either to go through a ritual called Carousel with the promise of being “renewed”, or go on the run and risk being hunted down by an elite police force known as Sandmen. Logan 5 is just such a man, and when he and his partner Francis 7 find and kill a runner, Logan takes an ankh symbol which identifies a person as a runner. When the computers of the city find out that Logan is in possession of the amulet, they order him to go undercover and find Sanctuary, the place where all the runners go to live out the rest of their lives. To ensure this, the computer adds four years to the time crystal on his palm to make it appear that he is on the verge of turning 30. Logan then meets up with Jessica 6, a member of the underground group that helps runners escape to Sanctuary. Logan then begins to run, but in the process realizes that there is much to live for and that he is just entering the prime of his life.

Based on the Best selling novel written by William F Nolen, Logan’s Run is based in the 23rd Century. Hollywood released this film in 1976 about the survivors of war and pollution living in a giant domed city where everyone lives for pleasure! There is just one catch, you can only live up to 30 and then you are ‘Renewed’ on the Carousel or as I like to call it: The Death wheel Explodathon!!!
The Carousel is considered a part of their life cycle where people are released to become renewed and therefore begin a new life and if you watch the film the crowd cheers as there former friends float up and explode right before there very eyes!!

Logan 5 (Michael York) and his friend Francis 7 (Richard Jordon) are both ‘Sandmen’ (no, not Star Wars). Sandmen are considered the policemen of the ‘dome’ and are fundamentally there to track down any ‘runners’ that do not want to be renewed (exploded). It seems to be a game to them; in fact everyone seems to have a child-like attitude to life. In the first scene these two are seen tracking down a ‘runner’ and then toying with him until Francis 7 finally shoots him dead. They do not see it as murder, as they consider runners to be less then human. They both can’t understand why they would not want to be renewed.

The story takes a twist when Logan summons a woman through his mail order wardrobe. This woman is called Jessica 6 played by the lovely Jenny Agutter who unfortunately cannot match her dazzling acting display of “Walkabout”. Things happen that make Logan question the way things are run which leads you on a rollercoaster ride of action and excitement. A small appearance from Playboys Farrah Fawcett is well worth watching (oh how they could act in the 70’s!)

“Logan’s Run” was one of those touchstone moments for 70s teens and pre-teens like me, presenting a society where people are ritually killed at 30 to keep the population steady inside a domed city in the 23rd century. The concept of no life after 30 is what registers with most people who know about this film at all, but those who saw it when it was in theaters, particularly us young and impressionables, never forgot the scene in which we see the process of the city’s 30-nothings being ritually exterminated in a ceremony called Carousel.

Watching the Carousel sequence today might cheat the effect: It comes off as some kind of bug-zapper ballet with a disco ball at the top. But the way these people stripped to form-hugging bodysuits as they floated and cartwheeled to the ceiling, arms upraised to invite the explosions that ripped their bodies apart, was mind-blowing at the time in an almost “Saving Private Ryan” way. To add to the effect, the ritual is performed in an arena packed with cheering spectators, blood-drunk citizens of this city whose own dates with Carousel are soon approaching. The false belief behind Carousel is the notion that they may be “renewed,” reborn again inside the domed city to enjoy another 30 years of what amounts to a consequence-free lifestyle.

It’s a sort of concept that can go in many directions. I figured when I saw the movie they were ragging on the life-after-death notions I was taught every Sunday at church, with “Renewal” being Heaven and all that. But looking back at it now, you can see the finger more directly points at the materialist trappings of life in the 1970s, with Renewal representing the sort of formless belief in reincarnation espoused by New Age types. The “death by 30″ ideal fits in perfectly with the youth culture prevalent then and more so now. The city’s interior looks like a mall, and in fact was shot in one, the Apparel Mart in Dallas, but that only strengthens the concept. While the dystopian notion of the future represented in “Logan’s Run” is in many ways as dated as those futuristic films made in the 1930s showing dirigibles docking on skyscrapers, in some ways the film is quite prescient: People sit at home and dial up sexual interludes with strangers, except in “Logan’s Run” the bodies are real and not in cyberspace.

There’s a lot else that’s right about “Logan’s Run,” like the eerie electronic score by Jerry Goldsmith, the set design, and the costumes. The lead actors, Michael York as an appointed executioner or `Sandman’ for those fleeing Carousel named Logan 5 and Jenny Agutter as his queasy companion Jessica 6, are solid and seem at ease in their alien environment. Richard Jordan, really shines as Logan’s pal turned adversary Francis 7, a fellow Sandman obviously too much in love with his job.

But once Logan and Jessica flee the city, we are treated to regurgitated bits of earlier ’70s sci-fi flicks like “Planet Of The Apes” and “Soylent Green.” They fight a robot who looks like a silver Coke machine and meet an old man who teaches them life can continue after 30. The pace slows down considerably, with a lot of nature walks and meaningful glances between Logan and Jessica to tell us they are in love. By the time Francis appears to put an end to Logan and Jessica’s run, it’s too little too late.

News is there will soon be a remake of “Logan’s Run,” which is about time. Everything else from the 1970s seems to have been remade, so why not something that really needs it? One can only imagine how today’s technological advances, with CGI and the like, will help considerably. The producers would also benefit from rethinking the film’s second half. Either keep L&J in the City of Domes this time, or if they must escape it entirely, give them something better in terms of adventure than skinny-dipping and meeting a cat fancier. I also fondly remember the brief TV series that sprang from the movie, with Logan and Jessica fleeing Francis in a hovercar accompanied by an affable android named REM. Getting REM into the remake would be a smooth move.

Returning to the original, it’s a great concept with some real entertainment value before it begins to fall apart too obviously. It’s a fun kitschy ride that could have been a whole lot more. The opening Carousel sequence still packs a punch, but the rest is a case of diminishing returns.

Yet I still enjoy this movie, and there’s a chance you might, too. It’s not great cinema, or even good, but like the decade it sprang from, not entirely disposable despite the shallow glitz around it.