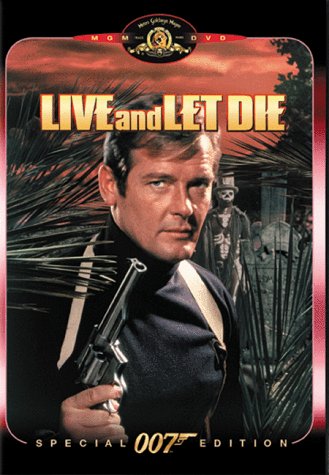 Bond 8 and 007 is assigned to investigate the recent murders of MI6 agents in New Orleans, San Monique and New York. Suspicion falls on San Monique ruler Dr Kananga, a man who has definite links to Harlem crime lord Mr Big. As 007 digs deeper he uncovers a plot to corner the world’s heroin market, but halting such a plan is hindered by the presence of voodoo in his midst.

Connery was gone, for good this time, no amount of cash would entice him to don the tuxedo for a “legitimate” Bond movie again……. This meant that producers Broccoli & Saltzman would be showcasing the third actor to play James Bond in a four year period! After the fall out of the casting of Lazenby in OHMSS, it was agreed that a established actor was needed this time around. Timothy Dalton was mooted, as he was for OHMSS (he was never offered the role though until 1986), but it came down to just two actors, Roger Moore & Michael Billington. Billington would screen test for the role of 007 a few times in his life but never landed the coveted role, as a sweetener he got to play a minor character in 1977’s The Spy Who Loved Me. So Roger Moore it was, someone the producers knew quite well and who was well in vogue after starring in The Persuaders and The Saint. He also was honoured to play the role, wanted it badly and accepted the fanaticism that went with it.

Moore’s take on Bond the man was a world away from Connery, and rightly so, but Live and Let Die is not far removed from Connery’s last outing, Diamonds Are Forever. In truth it’s a weak script, with Mankiewicz probably under orders from above to play to Moore’s strengths and keep the overt humour and cartoon escapades as a selling point. The decision to pitch Bond into a world of voodoo is a good one, and it was not, as some believe, an attempt to grasp the tails of the Blacksploitation market that had made waves in the early 70s. It’s a better film than Diamonds Are forever, without doubt. The villains are memorably played, though Kananga’s (Koto) demise is indicative of the daftness that would blight many Bond movies from here on in, and in Hamilton’s hands the action, especially an adrenalin pumping speedboat chase, is quality entertainment. Top blunderbuss theme tune, too, from Paul McCartney & Wings. While Felix Leiter is back on good charming form in the hands of Hedison (a real life friend of Moore and it shows).

Problems elsewhere, though, stop this from being a great Bond movie. Much of the film is made up of scenes that are played purely for smiles rather than for dramatic purpose. In short a Bond movie has stopped taking itself seriously. The introduction of Sheriff Pepper (James) is pointless, the beautiful Seymour shows promise but then becomes one of “those” Bond girls who is a liability to 007 outside of the bedroom, and the film is padded out with scenes that offer nothing important to the story. Hendry’s Rosie Carver is a dope and poorly written, though it gave Bond his first inter-racial “dalliance”, something that the producers were nervous about behind the scenes. While there’s no Q! And George Martin’s score is very hit and miss.

A new actor playing Bond and many failings in the picture, could Bond still succeed? Yes indeed! Moore, in spite of not getting good page to work from and getting stick from the critics, put his own stamp on the role by looking smooth, having an excellent vocal delivery and being someone the girls wanted to bed and the boys wanted to be. The box office sang to the tune of over $160 million, over $40 million more than Diamonds Are Forever. The tag-line ran “More Action, More Excitement, More Adventure”, though not entirely accurate, there was indeed an abundance of fun play and gadgets are us (Felix Lighter, priceless). Bond was set to continue coining it in for the foreseeable future, but the dye had been cast and Bond ran the risk of becoming purely a cartoon caricature….. 7/10

Bond Over Easy, Cool But Dumb,
Was Roger Moore channeling Austin Powers in 1973? There’s a scene in this, his first go-round as 007, where Bond is tied up and his arm is cut to draw blood and attract some hungry sharks swimming below. Moore twitches his eyebrow and asks: “Perhaps we can try something in a simpler vein.”

Those sharks don’t need any frickin’ laser beams on their heads to get you to smell the Austin. Moore gets a lot of blame for turning the Bond movies into weakly-plotted farces, ignoring that the series had been moving in that direction since “Goldfinger” and that the previous installment, Sean Connery’s final EON bow “Diamonds Are Forever,” was every bit as goofy. Also, Moore could deliver a more serious Bond when the script allowed, and two of the finest Bonds ever, “The Spy Who Loved Me” and “For Your Eyes Only,” were his.

But there’s no getting around this, “Live And Let Die” is a dumb movie. The gadgets are silly, the villain’s scheme is ill-defined, the storyline is frenetic and unengaging, the action is plodding and overlong. Moore starts out not quite know how to play Bond here, while the movie requires him to play the fool sauntering through Harlem in a double-breasted suit like the Prince of Wales waiting for some natives to show him around.

But this film makes me smile, in part because I’m young enough to remember what it was all about when it came out. If this was Bond for the cheap seats, it at least delivered the goods, with some vivid supporting characters, a knockout visual style, amazing title music from Paul McCartney, and most importantly for Moore’s future in the series, drop-dead quips. My favorite is when the nasty Tee Hee twists his pistol muzzle out of shape with a metal pincer arm, then giggles when he hands it back: “Funny how the least little thing amuses him.”

Julius Harris is menacing but charming as Tee Hee, mostly mute except when he sticks Bond in a gator pond and suggests the best way to disarm the beasts is to try and pull out their teeth. Chief villain Yaphet Kotto has his moments, too, but with odd shifts of character. In the beginning, he’s stone-cold Ron O’Neal in “Superfly,” and at the end, he’s plummy Charles Gray in “Diamonds Are Forever.” Jane Seymour is Bond’s love interest, and why she goes off with him is another of those things best not thought about long.

There are two great characters in this movie, though, bigger than just about anything seen in a Bond movie before who kind of work in tandem in overhauling any objections about this film being too “cartoony.” Clifton James is redneck sheriff J.W. Pepper, who throws off one madman line after another while Bond is off on one of his long silly chase scenes. James mugs through every scene he’s in, rolling his tongue around, playing off everyone and everything, and delivering every hackneyed Southern stereotype to such righteous perfection it’s enough to make cotton sprout out of his ears. Bond purists who whine should just take their vodka martinis shaken not stirred and let the rest of us enjoy the craziness. The series is supposed to be fun; if you want serious espionage go watch “Smiley’s People.” (I grant you Pepper shouldn’t have returned in the next Bond film; that was a mistake.)

The other great outsized character is Geoffrey Holder as perhaps the most mysterious figure in the whole series, Baron Samedi. Is he supernatural? Is he just crazy from the heat? He’s certainly different, a guy who sides with the bad guys without quite being one of them. The always-eerie quality of his appearances, either dancing in a big hotel production number or quietly sitting in a cemetery playing a flute, make you question whether there ain’t something to that voodoo after all.

It’s silly bashing Pepper but praising Samedi, they are both equally so unreal, in a way that’s in tune with the rest of the movie. The best thing to do is enjoy the different kinds of fun on offer. Frankly, not having these guys around might push this film on the bad side of Spinal Tap’s “fine line between stupid and clever,” the side where “A View To A Kill” and “Moonraker” are on.

But “Live And Let Die” is a winner. It’s a fun movie that brings me back to younger days, when my heart was an open book. It’s a nice transitional film for the series in that Moore managed a mostly smooth entrance to the role of Bond. And it has one of the best final shots in movie history. That’s all I’ll say there; you know it if you saw it.

One Of The Better Bond Films,
LIVE AND LET DIE is an improvement over the two preceding Bond films. Humour is kept in its place, Guy Hamilton doesn’t reach the artistic heights of GOLDFINGER but improves on DIAMONDS ARE FOREVER, the plot has a relatively realistic idea with Yaphet Kotto playing one of the better villains with the right mix of charm and menace and with all the bad guys being black we get to hear lots of funky dialogue like ” Yo, watch out bro you gotta honky on you’re tail “. In these PC times you aren’t allowed to write lines like that anymore which is a shame.

Where the film falls down is Roger Moore as Bond. It’s through no fault of his own but Sean Connery is an impossible act to follow, cinema goers must have been shocked in 1962 when they saw a violent anti-hero killing bad guys in cold blood in DR NO. Here however there’s no ruthlessness to Moore’s Bond and therefore no real impact, but I suppose both the producers and Moore didn’t want the part played as a Connery clone so this is forgivable and Moore is a lot better than Lazenby, and the series hadn’t developed into farce as we’d see in later Moore Bonds like MOONRAKER and A VIEW TO A KILL.

So an entertaining film to watch if you’ve got a couple of hours to spare. Probably Moore’s second best film in the series after THE SPY WHO LOVED ME