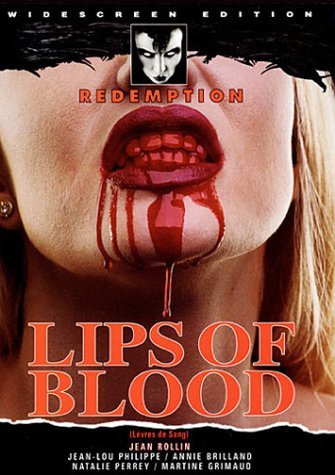 It’s obvious that Jean Rollin lives is his own private dreamworld and this entirely translates itself in his films. Normally, this is a good trademark for a director as it gives him/her the opportunity to create typical surroundings, styles and characterizations. ‘Lips of Blood’ is really empty!

It doesn’t contain much style and ever less substance. For a film that constantly features naked girls, it isn’t very sexy. The acting is atrocious and I didn’t notice any attempt by Rolling to build up tension, a grim atmosphere or a compelling story. Here he has great settings & scenery to work with (old ruins, catacombs, coffins…) and he doesn’t make proper use of it. It’s all so very detached and it feels like Rollin doesn’t want you to get involved. The protagonist is a seemly lifeless 30 something guy that gets obsessed by a poster of old ruins. It causes him flashbacks from his childhood but everybody acts mysterious about this….like they want to hide the past from him. The flashbacks are associated with the image of a young girl all dressed in white. When investigating all this, he unintentionally awakens an army of foxy vampires and his muse turns out to be the queen.

I’d say it’s better to avoid this film (and all the other Rollin efforts) if you’re not an avid cult-collector. It’s exaggeratedly surreal but not exactly fascinating. There were a few aspects in particular that hugely disappointed me:

1.All the characters are bleak! The lead character is the best example to state this but also the vampires are very unspectacular. Here are 4 of the most stunning beauties, able to raise hell, unleashed upon the world but all they do is wander around a little in the backyard. Go out and kill, ladies!!!
2.It seems to me like Rollin has a pretty ideal world-perspective. There’s a sequence near the beginning where the lead guy walks in on a photographer and her nude model. The nude model immediately shows off against this man she doesn’t know and a few seconds later, the photographer is nude as well! Turning around the room a little, saying, ‘Now where did I leave my skirt’. That’s not very stylish or sensual…that’s just tasteless and – oh yes – wishful thinking!

3.Where’s the music? If there’s one thing you can be sure about in these European Art House titles, it’s that it ALWAYS contains wonderful musical guidance. I reckon that sometimes the absence of sound increases the atmosphere and tension level of a film. Yet, this film didn’t have tension or atmosphere to begin with so it could have used a score.

There were a few more elements that kept me from liking this film, but you get the idea. I sure didn’t want to bash ‘Lips of Blood’ but I can’t bring myself to tell you something positive about it neither. Hopefully, Jean Rollin films are to be categorized as being ‘acquired taste’. In that case, I guess I should check out some other lesbian vampire films he made (more than enough to choose from: Fascination, Living Dead Girl, Requiem for a Vampire, Rape of the Vampire…) before I state my definitive opinion.