Life of Brian – 1979
See the movie that’s controversial, sacrilegious, and blasphemous. But if that’s not playing, see The Life of Brian. 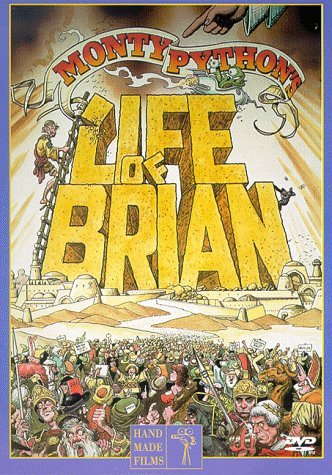 My Favourite Scene,
This is one of the most controversial movies ever made with several councils in Britain banning the movie , but I won’t go over that same as I won’t comment on other peoples opinions what is the best bit . I will come forward and say I thought the funniest scene in the movie was when Brian was brought by the centurion to speak to Pontious Pilate ( Who has a speech impediment ) and the centurion informs Pilate that Brian’s father’s name is obviously made up

A sentry laughs and Pilate reprimands him . The conversation continues with Biggus Dickus being mentioned once again causing the sentry to crease up with laughter

” Right I want him taken away to fwight wabid wild animals . I shall not have my fweinds widiculed in this way ” Pilate surveys the woom , oops I mean the room ” Does anyone else feel like a giggle when I mention my fwiend Biggus – Dickus . He has a wife you know . Incontenentia . Incontenentia Buttocks ”

The sentries collapse in whoops of laughter and Brian makes his escape which in my humble opinion is the funniest scene from one of the funniest movies ever made and did anyone think Maximus the hero from GLADIATOR had an equally silly sounding name ?

Not necessarily laugh-out-loud every minute, but it’s satirical edge and wit is as clever as the technical side of the film,

Monty Python’s follow-up to their cult smash Holy Grail was Life of Brian, a film that takes on (if not always with the utmost seriousness, then usually with a mix of silliness and slight intellectualism) the believers in religions, the zealous nature that belief brings out in people. I first saw the film in the theater upon its re-release last month, and I found it very funny, though not with the kind of belly laughs that I had on my first reaction to Holy Grail. It’s not without it’s scenes that stick out as some of Python’s finest (the Stoning, Pilate’s scenes, the Spaceship sequence), even as sometimes it goes a little too broad for comfort (part of the colisseum).

Yet, the great strengths that lie in Life of Brian are that 1) the writers and performers (Chapman, Cleese, Gilliam, Jones, Idle, Palin) bring their irreverent strengths to a fine point with the script and multiple roles. Even when a scene doesn’t get the laughs it could’ve or should’ve, it turns out to be a scene brimming with a cleverness that could only exist in the “Python-esque” universe. 2) the director (Jones) and designer/animator (Gilliam) lay the groundwork for this realistic atmosphere of 33 A.D. and bring out what is the best in the acting, Pythons or otherwise (famous British comedian Spike Milligan has a role of note).

Held over from the sets of Franco Zeferelli’s Christ film, the Pythons use all these locations and settings and little details to spring out their wild, brilliant gags. The look of the film enriches the comedic elements, and the result is (arguably, of course) the troupe’s best film.

Not for all tastes by the way (Monty Python in general for me took some while to warm up to, but paid off once it worked).