Lemora – 1975
A Child’s Tale of the Supernatural 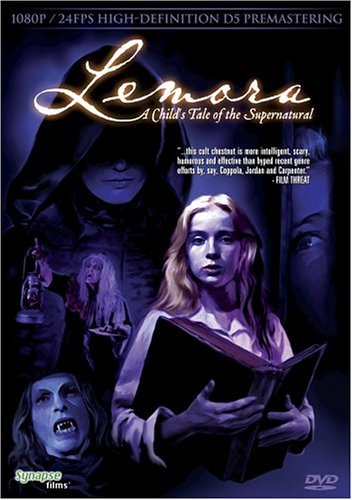 TERRIFIC tale of the supernatural!,
The plot of this film is rather confusing and not so involving, yet this is largely made up by the incredibly tense atmosphere and the beautifully dark filming. It really is one spooky sequence after another in this film and that’s a rare quality for horror films.

The title character Lemora is a female vampire queen who entices the young and fragile girl Lila Lee back to her birth region with the excuse of her gangster-father dying. The girl, who has been looked after by a strict reverend almost her entire life, begins a mysterious journey through a grim world filled with ferocious characters that are only out to take advantage of the innocent young child. When the girl eventually meets Lemora herself, it becomes clear that this latter has carefully chosen Lila to join her in the everlasting, blood-sucking life…

The atmosphere and premise of “Lemora” are somewhat comparable with the series of European lesbian vampire-movies that Jean Rollin made (Lips of Blood, The Living Dead Girl, Requiem for a Vampire…). Only Richard Blackburn’s screenplay obviously puts the emphasis on morbidity there were Rollin goes straight for gratuitous nudity and explicit violence.

This film is amazingly suggestive! We’re exposed to very few atrocities on-screen, yet every character the cherubic Lila runs into is a potential pedophile or pervert, offering her candy and favors. Heck, even the caring reverend and Lemora herself aren’t free of sexual sins…It’s truly haunting how all this is illustrated in the movie. “Lemora; a child’s tale of the Supernatural” easily is one of the most unsettling films I ever saw! The score is very eerie and there’s so much great scenery used that I can hardly mention it all.

This isn’t a very bloody film, though. The opening sequence, involving a gun massacre, leads you to believe that it will become an outrageous gore-flick but, don’t be fooled, the psychedelics starts immediately after. Beautiful and haunting film, especially recommended to fans of atmosphere-driven horror movies and obscure cult-stuff.

Creepy, different vampire tale,
The film is set in Georgia of the 1920s. Sweet innocent 13 year old Lila Lee (Cheryl Smith) goes to visit her sick father. Unknown to her it’s a trap all set up by Lemora (Lesley Gilb) a woman vampire with distinct lesbian tendencies. Will Lila Lee fall into her clutches or escape?

I caught this originally on late night TV many years ago. The print was faded, in terrible condition and (slightly) edited–but I knew I was seeing something different. I didn’t see the whole thing–I was exhausted (it started at 1 am) and I couldn’t stay awake…but it never left me. Now it’s finally available in a truly stunning transfer by Synapse. The picture and sound are crystal clear and the colors very vivid.

The film is very creepy–there are a LOT of sexual innuendos thrown at Lila at the beginning (but it IS needed for the story). The lesbian touches are there but not explicit–this movie is very PG (no blood, gore, nudity or swearing). Still they come through and actually help the movie. The low budget this film was made on shows often but it works in the films favor. There’s atmospheric lighting, eerie sounds, creepy settings and a nonstop feeling of dread. Also Gilb is VERY imposing as Lemora. Despite the rating this is an adult movie–as others have said–a fairy tale for adults.

There are plenty of things wrong with this however. The script wanders all over the place (but then fairy tales do too), the ending drags a bit and the acting is terrible all around (Smith is bland and Gilb’s acting is SO bad I was giggling at times). Still, despite all that it works. A one of a kind vampire movie. Not for everybody. I give it a 9.