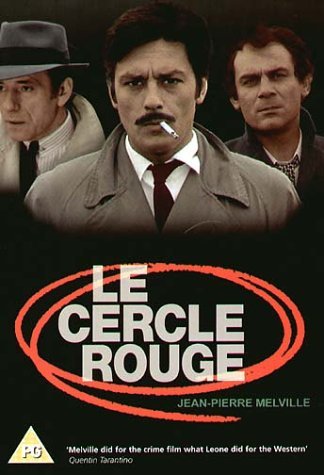 Cercle rouge, Le (1970)
One of my new favorite heist pictures: a smooth success for Melville and his cast,

Jean-Pierre Melville is a director I’ve only recently gotten acquainted with (I need to see Bob le Flambeur and Le Samourai again to fully grasp them), but in watching Le Cercle Rouge (The Red Circle, supposedly based on a saying in Buddhism) I realized I was watching as skillful and absorbing a crime film as I had seen in a quite some time. Though his film has dialog, it is mainly to keep the film’s scenes rolling along, adherent to the plot. What kept me on the alert, even in seemingly mundane scenes/sequences, was the emphasis on the characters’ movements, or behavior patterns. Melville has his story laid out, and he is careful to take his time to tell it (this could seem boring to some, but it does seem to work since he puts a little more emphasis on the weight of the characters/environments over plot).

Yet look at each of the four main players: Alain Deleon as Corey (just released from prison, scheming a new heist), Gian Maria Volonte as Vogel (escaping & on the lam from hand-cuffed custody, meets Corey by luck), Yves Montand as Jansen (an aged pro with many years of experience with weapons, a friend of Vogel), and Andre Bourvil as Mattei (an experienced investigator, who is on the look-out for Vogel, and on his toes with internal affairs). Each of these actors plays their parts with precision, detachment, and they each have their own kinds of moments that indicate to the audience what their personalities might be besides as criminals and cops. The heist sequence gives little hints, for example, like how Vogel cops-a-feel off a female statue while passing down the halls, or how Jansen takes out a flask and merely has a whiff of the contents (and what a dream this guy creates). Even Corey’s movements involving a photograph of a woman arouse interest.

As absorbing and cool the story becomes, and as great the skills were to make it happen (via cinematographer Henri Decae, the editing, and the musical score by Eric Demarsan), it’s the people on the screen that gain fascination, in how they stay true to their natures and ideals. Not a film to be missed by French new-wave enthusiasts, and modern-day crime movie buffs might want to take the 140 minutes to soak up the atmosphere of Melville’s work. A suave piece of filmmaking: A+