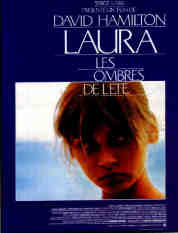 Forget Viagra..if you are over 40 with any sort of…er, “technical problem,” LAURA will fix you right up (as it were).

I’ve often wondered why David Hamilton hasn’t been arrested! The world’s dirtiest old man – and he gets PAID for it!

Considered soft-core pornography when released, Hamilton quickly sprang to his age-old defence..”But this art chaps!” It sure IS! Pre-pubescent wannabe ballet dancer Laura – she must be all of 14, stripping off, for her MOTHER for God’s sakes! – and performing multiple er, dance moves? gymnastic workouts? whatever…for the camera….and most every other paedophile in the Western world!

The “plotline” such that it isn’t, has James Mitchell as sculptor Paul Wyler, obviously playing out Hamilton’s own fantasies, who wants to sculpt Laura, as he did her mother (OCTOPUSSY Bond girl Maud Adams, can you believe?) 20 years earlier.

All the Hamilton trademark shots – soft focus, young rear ends, girls drying each other off in the showers, skipping down the boardwalk, teenage nudity viewed every which way.

God, no wonder I like this flick! Seriously folks…art house fodder? supposedly….but in the upshot, just sexploitation of very young girls – and ALL in the name of “art” he did it with BILITIS I’m SURE he did it here…pretty often too!