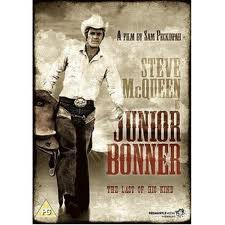 Average film but it does feature a cracking lead performance

The film itself is interesting enough, even to those not interested in its core subject of Rodeo, and it’s a story that I think most viewers can get onside with. The title character played wonderfully by Steve McQueen returns to his home town of Prescott, Arizona, to find that the family he left behind is now fractured and that age has caught up with him and his Rodeo life.

It’s a very up and down piece that on the surface doesn’t seem like a directed effort from Sam Peckinpah. But there’s some very special treats in the film to look out for. I have never been to a Rodeo so I have no frame of reference as regards the power of the Rodeo scenes here, but they certainly hit the spot of this particular viewer, in fact, I was transfixed by them. The film is also dotted with interesting and nicely drawn characters that are thankfully well realised by the acting talent on show. Ida Lupino, Robert Preston & Ben Johnson all help to keep the film way above average, but ultimately it’s Steve McQueen turning in a memorable lead performance that actually deserves a better film than the one it ends up being.