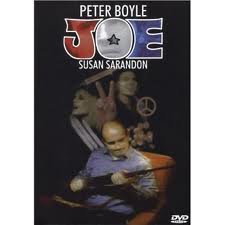 Dennis Patrick plays a man who accidentally kills his daughter’s boyfriend and then reveals his secret at a local bar. Joe (Peter Boyle), a bigot who is getting drunk there, at first takes it as a joke, but then the story is confirmed on the evening news.

Instead of calling the cops or the like, Joe decides that, since the guy killed a hippie, they must be kindred spirits! He blackmails the man into becoming his pal. At first, the film seemed harsh and judgemental, but, as it revealed itself, it actually became quite a complex portrait of the current society.

Yes, I think it does exaggerate a bit, but in amusing ways that don’t really detract from the power of its messages. Susan Sarandon debuted in this film, and it’s a shock to see how pretty she was around 23.