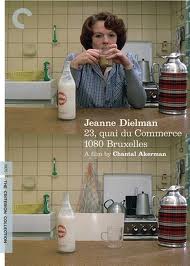 Someone has to provide the admittedly obvious complaints, so I’ll do it,

A film that is much more interesting to read about than actually watch. Akerman takes “realism” to a new level, basically setting up a camera and observing a very lifeless, dull person for 200 minutes. That woman, played by Delphine Seyrig, is a prostitute, catering to a client a day in her depressing apartment, as well as a single mother.

We study her daily rituals as we occasionally glance down at our watches (or push the call button to see how much time is left). Okay, I get it. The problem is, I got it after the first 10 minutes. I got it, really, from reading descriptions of the film. After that, the remaining 190 minutes aren’t especially worth sitting through. Notice that even after 190 minutes of breaking taboos of how not to put the audience to sleep, Akerman forces the (literally) climactic sequence.

I think I understand what she was going for here, but it’s not especially honest given the rest of the film. It shows that even she had to resort to a cheap narrative trick to end the film. All in all, the film is little more than a gimmick. Though I could have been doing better things with my time, I am glad I finally got to see this. I wasn’t really bored out of my mind – like Jeanne Dielman, I went through my own daily rituals while glancing up at the screen.

Chantal Akerman did make some accurate observations about the human condition after all, even if they are fairly shallow in themselves.

about everyday things, or an action movie, 15 January 2010

Few films can actually claim originality: some early on may have pioneered techniques or acting styles, but as has been said before and again there are only so few stories to tell. It’s the variation that counts, and as a variation on the ‘everyday grind’ as it were, Jeanne Dielman is one of the most original breakthrough films one could experience. It’s three and a half hours of, as one might say, nothing “happening”. The story is the woman, what she does, the ritual of her given tasks in silence, loneliness, a widowed mother who cooks, cleans, shops, eats, sleeps, bathes, and wits without a seeming challenging thought to perceive.

You will know within fifteen minutes if you can stick with it. Ideally one wont watch this right before bedtime, but Chantal Akerman makes sure that her audience is tuned in to her experiment (or not, as some have noted). I imagine she would even be fine if some stop watching early on or walk out. She’s making a provocation by her method of timing. For those who do stick around, she knows she’ll give a true “action” movie. It’s the antithesis of Hollywood action fare. For example, the average shot-length for a Hollywood blockbuster is about four or five seconds tops. Here, it’s roughly four minutes. Per shot. If you ever wondered, just once, if a filmmaker could put an intense amount of focus and patience on a woman making coffee or washing the dishes, or taking a (very un-erotic) bath, or staring at space, look no further.

But Akerman, in tracking Jeanne (perfectly sedate and blank-faced and mechanical Delphine Seyrig) in her three days of time in the film, is not simply making a decision totally alienate her audience. Every action here, every little chore or quiet dinner or knitting serves a purpose for this narrative. When we experience ritual and seemingly simple tasks of work around the house or chores, in real time, the underlying problem is revealed. There is obsession, a mechanical way about doing the same thing over and over, which also goes over into Jeanne’s casual afternoon prostitution gigs.

What it reveals, I think, is a character like Jeanne’s ultimate lack of free will and character which, by proxy, Akerman means to say is a problem among many women who have nothing but housework and kid(s). That the camera never, not once, moves by way of a pan or title or zoom-in or tracking shot or whatever (or, for that matter, a close-up) adds to the static imprisonment of it all. The final primal act is, in fact, a kind of desperate but real act towards a change, something out of the same grind of the usual.

Akerman’s direction is unrelenting and sparse, and could be considered a pre-Dogme 95 film if not for the (artificial?) lighting from outside into the apartment at night. It’s less a slice of life than a scaling hit pie that you watch cool off in real-time on the counter. Some may be deterred by the length, or the arguable disdain for dialog except for a few key scenes (reading the letter and telling a brief back-story on Jeanne’s marriage, by the way both done as ritualistic and blank as cleaning dishes). For me, the lack of easy melodrama or conflict actually upped the stakes. I cared about Jeanne, despite her existential trap, that she might break out of the static world of daily action and minutia. It’s a staggering piece of work by a young, courageous artist with something today, in a take-it-or-leave-it approach.