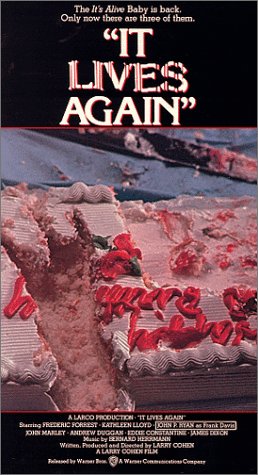 Mutant Babies And Microphones,
Anyone remember that 80s sci-fi series V? It’s best remembered for a scene where a teenage girl gives birth to an alien mutant baby, but what a lot of people can’t remember about the series is that every single scene has a studio microphone popping into view. Guess what? IT LIVES AGAIN also features mutant babies and microphone goofs. Look at the scene where the party has just broken up and Jody and Frank sit on the sofa. You can clearly see a microphone sticking up from the coffee table. I’m surprised the scene wasn’t reshot because the microphone is so obvious it’s impossible not to notice it. Director Larry Cohen has noticed it but instead of reshooting the scene he seems to have dispensed with microphones for the rest of the movie!

Seriously I’m certain he has because the sound mix after this scene is all over the place, when someone speaks the volume of their voice increases/decreases from shot to shot and there’s also plenty of scenes with obvious overdubbing, and not to mention bizarre background noises.

As for the rest of the film it’s a disappointment. You’d think a movie with mutant babies on the rampage would have been so bad it’s brilliant, but the screenplay takes itself far too seriously and most of the actors seem to have other things on their minds especially Frederic Forrest who seems to be thinking ” I just hope Francis Ford Coppola releases that Vietnam war movie as soon as possible “