I Spit on Your Grave

This woman has just cut, chopped, broken and burned five men beyond recognition… but no jury in America would ever convict her! I SPIT ON YOUR GRAVE … an act of revenge 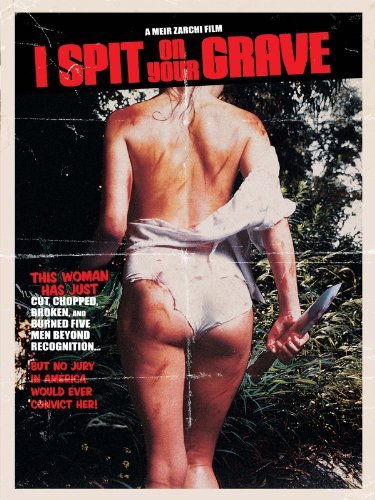 Plot:
· The film follows Jennifer, a writer who is working on a new novel and needs to get out of the city to finish it. She hires a riverside apartment in upstate New York to finish her novel, attracting the attention of a number of rowdy male locals. They catch Jenifer one day and strip her naked for the village idiot (Matthew) and rape her. Jennifer is later attacked and raped a further two times by the four degenerates, and her novel is also destroyed. But Jennifer slowly recovers and in her now-twisted, psychotic mind, she then begins to seek revenge on the four men who raped her.

Review by Noel Bailey
The benchmark for putrid film-making!,
Known pretty much world wide as I SPIT ON YOUR GRAVE, both titles are misleading, although DAY OF THE WOMAN is marginally more appropriate. REVENGE OF THE WOMAN might have been better or even “LET’S SEE IF YOU LIKE IT?” At no stage does she “spit” on anyone’s grave…no-one gets as far as a funeral!

Little more than a home movie, no that is incorrect..it IS a home movie! Camille Keaton is Jennifer Hill, a rather mousy little thing minding her own business in a friend’s retreat down by the river. She is set upon by four scumbags and subjected to the most disgusting and protracted rape which takes up almost HALF the film’s running time if you can believe it! That alone earns it a place in moviedom’s “Hall of Shame.” Beaten and left for dead, she recovers absurdly well and plots her revenge.

After a make-over and coming back to town looking like Miss USA 1978, she makes-out with the ringleader who fails to recognize her, until that is, she slices off his penis in the bath. It’s the high point of the movie as it were! The other three are despatched so quickly and tamely, (presumably her make-over cost so much, they had no budget left to complete the film beyond that afternoon!) one is left wondering simply, “Why did I rent this crap?”

Do not watch this with a girlfriend or in fact with ANYONE! Better still, don’t watch it!

Day of the Woman (1978)
Possibly The Worst Film I`ve Seen,
I can remember everyone talking about this from the early 80s when just about every home in Britain had either rented or bought the new home entertainment essential called a video recorder and my teenage peers and myself would discuss what videos we`d seen and I SPIT ON YOUR GRAVE was the one everybody was talking about. If you hadn’t seen it you’d heard about it due to its reputation of ultra graphic violence but the film was banned before I managed to see it.

It was only last year I saw it for the first time when it was released on DVD with several minutes of rape scenes cut. But even then this film churned my stomach, it’s just about the most pitiful excuse of a film it’s been my displeasure to watch. Absolutely everything is awful, the acting, the directing, the cinematography, the sound, but most of all there is no intelligent story here. I know there is a school of thought that this film has intellectual content on its themes of rape and revenge – yeah right. If that’s the case then why does I SPIT ON YOUR GRAVE spend so much time on the rape and murder scenes? And why does it have a ” comedy ” character in the shape of the dim-witted rapist?

Yup nothing like a little comic relief in amongst the gang rapes and mutilations. It’s a bit like saying EXTERMINATOR 2 is a masterpiece of urban angst.