I Drink your Blood 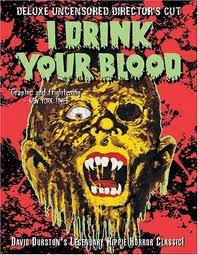 A laugh a minute!

Film starts right off with a nude (male and female) devil worshiping sequence and rapidly gets worse (or better depending on your view). A bunch of devil-worshiping hippies (with a leader named Horace!) come into a small town. They beat up a local girl and her grandfather and give granddad a dose of LSD. Pete decides to avenge his sister and grandfather by infecting rabies into a bunch of meat pies and then giving them to the hippies to eat (!!!!). The hippies do, get rabies and one hippie woman sleeps with a bunch of construction workers and infects THEM! Soon a small bunch of uninfected people are fighting for their lives.

Historically this IS an important film–it was the first film to get an X rating for violence alone (there is nudity but it’s within an R rating). It was cut to ribbons to get an R. Now we have the uncut version available. At best it’s a mixed blessing.

For starters the acting is terrible across the board–the hippies especially act like a bunch of retarded school children. And the script has some lines that had me gaping in disbelief. Here are a few examples–After giving her boyfriend a big kiss a woman says, “Roger I’m very upset”; “There’s no one in the town because of the damn dam!”; “Rape is a little out of an engineers domain”; a man is shot down and someone says, “I have to call the Red Cross–we’re in a state of emergency”. Then there’s the gore effects which are, to be nice, primitive. There is a LOT of blood and violence here but it’s all so obviously fake it’s hard to take seriously.

Still I was never bored and I was constantly amused by the acting, script and pretty poor production values. Also you do have to give credit to these people–they had no budget and were just out to make a gory horror film. They DID succeed. Also the cast (male and female) are very attractive physically. So–not a forgotten horror classic but I’m glad it’s available in it’s uncut form. Worth seeing for horror fans.

By the way–there’s no drinking of blood.