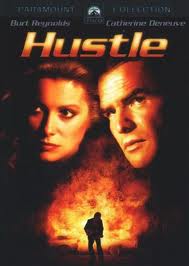 Every man’s in search of a white whale. And when you find him he usually kills you.

A dead girl on the beach, that creates heat.

When the body of a young hooker and drug user is found on the beach, the weary LAPD detectives wrap it all up quickly as a suicide. But the father is having none of it and sets about doing his own investigation. All parties involved with the woman, known or presently unknown, are heading for a collision course.

You are doing it for a nobody.

It’s a bleak and seamy L.A. that forms the setting for Aldrich’s sadly undervalued neo-noir. A place where the police are often corrupt, turning a blind eye to illegal activities perpetrated by high profile suits, where pimps, pushers and prostitutes thrive. Unfaithful wives, a shoe fetish and rebuilt asses also mark the land! Our central cop is Lt. Gaines (Reynolds), a cynical classic movie buff yearning for the European world of harmony depicted in the movies he so enjoys. He’s in a relationship with a French call girl (Deneuve), it’s a strained relationship, but there is love there if the two of them could just unshackle their hang-ups and vulnerabilities. And then there’s the tortured father of the dead girl (Johnson), an ex-serviceman of the Korean War, he’s highly strung, volatile, he carries deep emotional baggage that will become heavier the more he learns about his baby girl’s existence.

I’m starting to draw dirty pictures of what you do.

The case of the dead girl is merely a backdrop to the unravelling of the primary characters’ make ups. This is very much a character driven piece, a slow burn, complex and cynical picture. All characters mean something, adding much to the near depressing tone that Aldrich, Shagan and Biroc have (rightly) favoured. These characters give the film many layers, rendering all dialogue to be of interest, while ensuring the narrative is not linear. It failed at the box office on release, it’s perhaps not hard to see why. On the surface, via plot summary and marketing, the film lovers of 75 thought they were getting a murder mystery-cops and villains-crime story, with Reynolds leading the machismo fight for justice. But this is far better than your run of the mill crime picture, it’s dark, brooding, and even allows itself some moments of humour to nestle in nicely with the uneasy nature of the beast. While the finale is pitch perfect noir, it’s not apologia, it brings the film to a cruelly ironic close.

Patiently crafted by the brilliant Aldrich, and performed with considerable skill and emotion by the cast, Hustle is top line neo-noir and deserves a more appreciative audience. 9/10