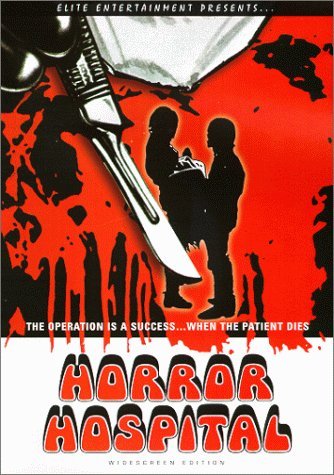 Inept Horror Movie,
A lot of people seem to be under the impression that this film is a deliberate attempt at doing a blackly comical horror movie and I guess the opening dialogue of ” Look at that faggot . He thinks he’s Greta Garbo but he looks like a lemon meringue pie ” does give the impression that HORROR HOSPITAL is tongue in cheek but I think it’s a just an awful movie

Take Judy’s introduction scene where she meets Jason on the train ( And lets ignore the fact of how this defies statistical odds ) where she feels uncomfortable in the company of the laddish bloke but for reasons known only to the screenwriter tells both Jason and the audience her entire life story . Yeah I know it’s exposition but couldn’t it have been done in a more logical manner ? In fact that’s the serious problem with the movie there’s no type of internal or external logic . Dr Storm gets pushed about in a wheelchair but it’s revealed at the end that he never needed a wheelchair in the first place so why has he spent most of the running time in one ? Why haven’t the relatives of the lobotomised zombies tracked their loved ones down with the exception of Millie’s boyfriend ? These and a hundred other questions are never answered and while HORROR HOSPITAL never really takes itself too seriously that’s no excuse for delivering a screenplay ridden with plot holes

The directing isn’t much better and feels like it was filmed in a cheap and cheerless manner by film students . The female characters of Judy and Millie are played by very pretty girls but unfortunately it’s obvious their talents as actresses are non existent which makes me think they were only cast because they were the only females the producers could get who were willing to appear naked . Robin Askwith is alright as Jason but did we expect an Oscar worthy performance ? And I’m afraid Michael Gough is totally wasted . Gough could have been one of Britain’s greatest actors of the 20th Century but his undoubted talents were wasted in appearing in total garbage like this , KONGA , TROG and SATAN’S SLAVE . Perhaps the quality of this movie can be summed up by the title credits which read ” Guest starring Dennis Price ” . When you’ve got a movie advertising cast members you’ve never heard of that’s always a bad sign

Horrible is right!,
Two dumb 20 somethings, Jason (Robin Askwith) and Judy (Vanessa Shaw) travel to a remote castle in the middle of nowhere in England–him for a vacation, her to meet her aunt (Ellen Pollock). Unfortunately, the place is run by mad Doc Storm (Michael Gough) who, with the aunt and his dwarf assistant (Skip Martin) have some interesting ideas for the two.

The film opens with a great double decapitation and has a creepy moment when Shaw discovers a “dormitory” but that’s about it. The plot is vague…to put it nicely and has really stupid dialogue and scenes (i.e. Doc Storm tells Jason all about his experiments out there…for no reason at all). There’s plenty of blood but the “special” effects are pitiful and there’s way too much gratuitous female nudity–one very ugly scene has a nude women brutally beaten to death with a cane. Also the movie moves very slowly and is dull.

The acting varies: Askwith is ugly and annoying with a horrible 70s hairstyle; Shaw is beautiful but wooden; Pollock looks embarassed…only Gough seems to be enjoying himself while chewing the scenery as Storm. Skip Martin, on the other hand, REALLY overacts…he makes Gough look like a Method actor!

I give this a 2 for Gough and the cool guys in leather on the motorcycles. Otherwise this is vague, boring and stupid. Don’t bother.