His Name Was Madron 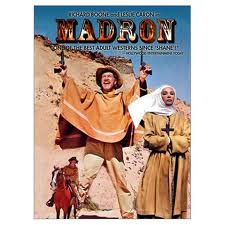 Well Hell’s Bells!
Madron is directed by Jerry Hopper who co-adapts the screenplay with Edward Chappell from a story written by Leo McMahon. It stars Richard Boone, Leslie Caron and Gabi Amrani. Filmed in Israel and Hollywood, cinematography is by Marcel Grignon and Adam Greenbereg and music is by Riz Ortolani.

A nun (Caron) survives a wagon train massacre and teams up with a gunslinger (Boone) in a battle for survival.

I’d like to say that the fact the similar themed Two Mules for Sister Sarah was released the same year is the reason this is little known. But that simply isn’t true. For Madron (AKA: His Name Was Madron) is a poor movie, saved from stinker damnation by Boone’s fun performance as the grizzled title character. Film consists of Boone and Caron trekking thru the barren sands finding each other as they fight off bandits and injuns in a series of poorly executed action scenes. Script is weak and plot holds no surprises, like wouldn’t you know it, once Nun Caron throws off the Habbit, she’s a foxy babe!