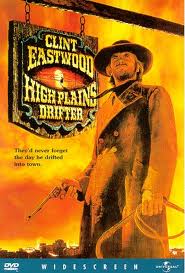 My first Clint Eastwood western…,
…and it might be my last. This film was supposedly “inspired” by the tragic murder of Kitty Genovese.

A stranger (Clint Eastwood) wanders into the very small town of Lago. Within 15 minutes he’s shot three men dead and raped a woman. The townspeople hire him to kill three men who have been released from jail and are coming to the town for revenge.

I’m not a fan of Western movies so I’m probably not the best judge on how good this film is. I found it somewhat self-indulgent and a little slow. The violence isn’t that graphic (compared to what we have today) but do we need to see a brutal, bloody and long whipping twice?

The sexism in this in this is just unbelievable. He rapes a hooker (well played by Marianna Hill) and she LIKES it!!! He then seduces Verna Bloom which gives her the courage to leave her husband. It seems that Eastwood thinks he’s so great in bed that women automatically love it and get strength from him. What saves this film from being totally worthless is the main plot–the townspeople of Lago stood around and watched while their sheriff was whipped to death. No one tried to help him. (I’m not giving anything away-it’s shown at the beginning) So, the townspeople are guilty (in a way) of murder. A reason is given for it–but does that excuse what they did? Also Eastwood is a killer and a rapist. There’s not one person in this film to root for. Only Billy Barty comes close. I could be seeing too much into this, but how can you enjoy a movie where all the characters are murderers?

It is well-directed by Eastwood–there’s some really beautiful wide screen photography here. The acting is OK. Eastwood never moves a muscle in his face but the townspeople and the killers themselves are well done.

I can’t say I enjoyed this but I did find the psychological aspects of the plot very interesting. But it’s very full of itself, was boring in parts and is pretty depressing. I can only give it a 6.